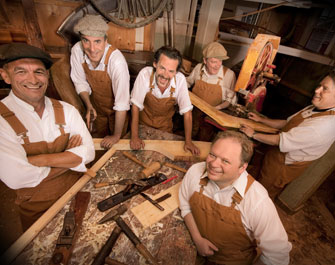 Celtic super-group Rawlins Cross is touring Nova Scotia and Prince Edward Island over the coming week, and we have tickets to give away!

Simply send us an email at info@celticlife.ca if you would like to attend. In the meanwhile, here is an interview we did with the band’s piper Ian McKinnon!

What is your own background/ethnic heritage?
I’m a typical Canadian mix-breed.  As we used to say as kids, my sisters and I are 1/2 Scottish (from my dad’s side), 1/4 Acadian French and 1/4 Irish (from my mom)

When and why did you start playing music?
I grew up in Halifax at a time when the schools music program was at its height.  I started on trumpet (40 years ago) and a year later started taking highland bagpipe lessons.  My dad instilled a love of music in myself and my four sisters.

How long has the band been around?
Rawlins Cross was formed in 1989 in St. John’s, Newfoundland.

How has the group evolved since that time?
We really hit our stride in 1993 when Joey Kitson joined us as lead vocalist.  By that time our rhythm section had consolidated with Brian Bourne and Howie Southwood.  The band membership has stayed constant since then.  We took a long term hiatus in 2001 but reunited in 2008.

How would you describe your sound today?
Our sound remains relatively unchanged since the inception of the group; Celtic Rock.

Why the decision to do a Maritime-only tour this June?
We were asked to perform at the Summerside Highland Gathering.  We decided to build a bit of a Maritime tour around this anchor date.

What does the band have on tap for the rest of 2014?
Rawlins Cross will be performing again on September 27th for Northumberland Ferries’ Chef on Board event.  We’re looking at building some additional shows around that date.

Is enough being done to preserve and promote Celtic culture generally?
Celtic culture is alive and well in the Maritimes provinces of Canada, at the least.  Some of our most successful festivals, like the annual Celtic Colours Festival are huge internationally.

What can we be doing better?
We could all be using our social media networks to share and promote the culture and the artists that we love.