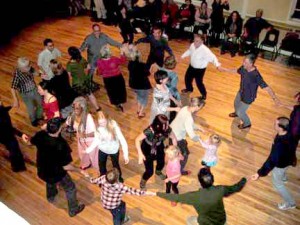 The Re-Jigged Festival came to a close on Saturday night (October 22) with an eclectic potpourri of musical acts. In its second year, the festival serves to showcase and explore “new directions in Celtic musical tradition”. While embracing song and dance from the past, Re-jigged delves into the “new trad” Celtic genre.

On stage, the hilarious Tony Quinn (MC for the Gala) declared, in a brief moment of seriousness, that there would be a third Re-jigged next year due to the success of this year’s workshops and performances! Although the dancers, musicians and singers were of top calibre worthy of a formal concert hall, in true festival style, the Saturday concert took place in a cozy, inviting church hall (Christ Church, Dartmouth). The 150-200 person crowd was immediately at home – they were not shy to show their appreciation for each of the performances through foot stomps, timely claps and Woo-wee cries. Fare from Propeller Brewery and Two if By Sea further made children and adults alike feel more like guests than patrons.

The first half kicked off with Kieran Jordan. Garbed in a polka-dot dress, ruby red tights and matching flower in her hair, she presented her sean-nós dance. Engaged in the improvised, traditional style, Jordan flavoured the performance with her own contemporary moves. Her jazzy Irish steps and fluid foot shuffles, leg twists and hip swivels explain why she is a leading pioneer for bringing this dance form to North America.

Next, PEI native Collette Cheverie enchanted the audience with singing folk songs from Irish, Scottish and English traditions, while accompanied by her long time friend Brent Chaisson on acoustic guitar. Her soaring voice was close to perfection, hypnotic at times. When Cheverie opened with Farewell, Farewell (composed by Richard Thompson), it was impossible to take my eyes or ears off of her.

A real treat was the thunderbolt appearance of World Champion Zeph Caissie, former member of the Riverdance Company. He was joined by four of his top students from his Diaga Irish Dance School. Audience members stood so they could fully observe the intricacies of their high speed, percussive feet. I was scared to blink for fear of missing one of Caissie’s leaps in the air or scissor kicks.

Gaelic professor Joe Murphy did not lecture to the crowd but taught the Celtic, traditional language through song. Murphy sung traditional and modern tunes with guitar, reminiscent of  a Scottish Captain von Trapp. He was triumphant in getting the whole audience to join him on the Chorus of The Dunn Song, a fun Irish diddy that had kids to seniors belting out the lyrics. After Murphy sang a capella The Ballad of James Larkin (paying tribute to the major Irish movement leader), I looked over to my companion, with tears in her eyes, as she exclaimed, “That was beautiful!”

Act I came to a remarkable close with instrumentals from Glenn Coolen on the uilleann (Irish) pipes, Seth Peters on guitar, Mark Currie on bodhran as well as a highland/step dance combined with hints of flamenco performed by Sabra MacGillivray. Founder and Music Director of Re-Jigged, Coolen could be dubbed “the pipes whisperer”. He seemed entranced by the instrument as he manoeuvred the chanter like he was smoothly churning butter; his fingers fluttered in tin whistle style to produced soaring trills, causing me to envision we were all sitting atop a cliff on the other side of the Atlantic.

Feature performers Dwayne Côté and Duane Andrews filled the second act with their hybrid Celtic-gypsy sounds. Côté the fiddler from Cape Breton and Andrews the guitarist from Newfoundland had a clear chemistry on stage as they communicated through eye contact, head tilts and through the instruments themselves; it is surprising they have only been formally collaborating together since 2010. Their debut album has won numerous accolades including the Independent Music Awards’ Instrumental Category judged by Tom Waits, Seal and Ozzy Osborne.

Côté and Andrews’ diverse performance this night was exemplary of Re-Jigged’s theme of transcending deep rooted Celtic music into experimental and novel traditions. Their repertoire consisted of kitchen party jigs and reels, classical compositions and Romani jazz genres. Before playing Back to the Hills (composed by J. Scott Skinner), Côté admitted that he used to hide his love for classical music. But, as he began the piece, he was akin to a violin virtuoso and was equally complimented by Andrews’ contrasting gypsy and Celtic guitar strokes and classical guitar rolls. The end of the song was met with jubilant, resounding applause.

Andrews has been deeply touched by the legacy of Django Reinhardt as was made clear by the duo’s performance of Tears composed by the ground-breaking gypsy guitarist. Andrews took the audience back in time as he soulfully played the rhythmic strums while Côté played bright melodies overtop.

There was still opportunity for the pair to bring their East Coast roots to the stage causing the audience to clap and stomp and Côté’s bow strings to become detached in true fiddler style. One highlight was their performance of Orange Blossom Special where they magically transformed instrumental tones into the sounds of a locomotive and invited the audience to a personal barn dance.

The Gala concert sadly had to come to a close. The finale seemed ideally fitting as it incorporated a mixture of various old and new traditions – Côté, Andrews, Currie, Coolen and Peters played while Jordan and Caissie tag-teamed a final dance.

But the night was not over yet! Audience members had the chance to now participate. Colleen Putt and Elizabeth MacDonald led circle dances for anyone who wanted to exit their comfort bubbles and participate in true Ceilidh fashion. My companion and I joined in one of the traditional choreographies and found ourselves smiling from ear to ear despite our clumsy motions.

With a range of talent, styles, time periods and Celtic traditions, the Re-Jigged Gala concert was the best night I’ve experienced in a long time. I look forward to next year’s festival in October and hope to also partake in some of the educational singing, dancing, instrumental or painting workshops. – by Michelle Brunet