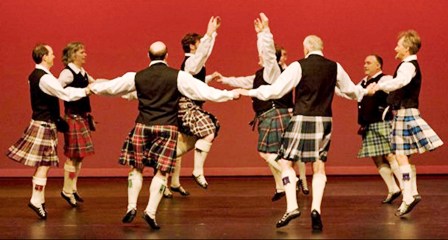 Since 1973, husband and wife John and Jennifer Kelly have been part of San Francisco’s iconic Red Thistle Dancers – both as dancers, and as president and artistic director respectively. The group is renowned for both its Scottish country dancing and its highland dancing.

“Country dancing is the old ballroom dance of Scotland,” explains Jennifer. “It is meant for people to participate in, not just to watch. By turns, highland dancing is intended for the highly talented to demonstrate their skills.”

Both Kellys were raised in England. Jennifer grew up in Surrey, though her paternal grandmother was born in Northern Ireland. She embraced all forms of dance from an early age.

“I loved to dance and took ballet, folk and ballroom dance classes, and learned some Renaissance dancing whilst at college in London,” she remembers. “I decided to take Scottish dance when I moved to the Surrey/Kent border at the start of my teaching career, and soon found myself shuffled into an advanced class. This was a fast moving group, and as a virtual beginner I worked hard to keep up.”

John is a native of Bristol, but his father’s family came from Denny Mills in Stirlingshire, Scotland. He hails from a long line of musicians, and it was his fiddle-playing father who introduced him to Scottish dancing at a Hogmanay ball.

“Since I wasn’t going to get up and make a fool of myself, he gave me a large Scotch which provided the courage to permit me to struggle through the Circassian Circle,” he recalls with a smile. “It was the start of many happy years dancing.”

John went on to become president of the Cambridge University Strathspey and Reel Club, meeting his future wife while both were taking dance lessons. The couple married in 1963, and immigrated to California three years later. It wasn’t long before Jennifer pulled together a small group to practice dance technique, which eventually evolved into the Red Thistle Dancers.

The Kellys note that the name of the troupe represents a bridge between the past and the present.

“It was chosen to highlight the fact that, though there were few native born Scots in the troupe, many had Scottish connections. The group reflects the diverse nature of Californian society, and so we decided that the Red Thistle, found growing here, would serve well as a symbol of both our Scottish heritage and current home.”

Along with being a good-standing member of the Royal Scottish Country Dance Society, the group is registered as a non-profit organization and is incorporated in the State of California. It currently has about 30 dancers of varying ages, each of which has gone through an extended trial period to ensure technical competence and compatibility with the rest of the group. They regularly perform at local and area concerts, highland games and other ethic gatherings, theatre events, private functions and weddings, and feature both country and highland dancing.

Current president of the troupe, Lin Pettengill, says it was a chance invitation that originally brought her to the Red Thistle Dancers many years ago. She has stayed on for decades.

“We have a lot of fun trying to be the best dancers we can possibly be. This is no ordinary dance class – there’s lots of choreography to learn, teamwork to build on and practice, practice, practice footwork and technique. The striving for perfection is what keeps me involved today.”