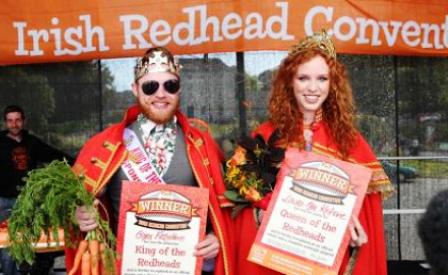 Redheads from every corner of the globe are being called home to the motherland this weekend for the sixth annual Irish Redhead Convention, in Crosshaven, County Cork, Ireland.

The convention is a whacky, ginger-loving celebration of everything to do with red hair. Every summer for the past six years the small coastal village of Crosshaven, in County Cork has turned into a glorious sea of ginger, as thousands of redheads gather from all over the world for this unique Irish festival of fiery hair, freckles, and frolics.

Carrot-tossing, ginger speed-dating, freckle counting, group photoshoots, a redhead parade, cinema screenings, certificates of genuine foxiness, and the coronation of the Redhead King and Queen are just some of the colorful events that take place.

The convention, which began is a friendly joke between proud redheaded siblings Joleen and Denis Cronin, is also a fundraiser for the Irish Cancer Society with 20% of ticket fees, as well as other fundraising activities, such as an outdoor yoga session being donated to the national charity for cancer care, research and support in Ireland. So slap on lots of sunscreen, stay in the shade and protect fair redhead skin from sun damage this summer.

Red hair is the rarest of hair colors and accounts for just 0.6% of the global population. Ireland has the second highest per capita population of redheads at 10%, next only to Scotland at 13%. The United States is believed to have less than 2% of redheads. So get to the Irish Redhead Convention and meet your fellow rare red gems.

Highlights of this year’s convention will include a seminar by author Jackie Collis Harvey, author of “RED: a complete history of the natural redhead,” whose book will be launched in Ireland just in time for the festivities. The convention will also host a panel discussion with successful redheads in business including Tristan Rogers, publisher of international redhead art magazine MC1R and Emma Kelly-Campbell, blogger at Ginger Parrot and the campaign manager behind the quest to include ginger emojis in Apple’s iPhone release.

Central to the convention is the Foxygen music stage, reserved just for gingers. Among the redhead performers are Ginger Nutz, a trad band made up entirely of natural redheads from the west of Ireland; ginger-fronted West Cork band The Baby Cheeses and a passionate group of local women, Crosshaven Ukuladies. The red-headline act for the weekend is much loved and highly acclaimed, Irish jazz and blues singer Mary Coughlan.

The on-site redhead cinema will include short movie screenings all about red hair, including the US comedic web series “Redheads Anonymous” and award winning, Irish language short, “Rubaí.”

There will also be a family friendly event catering to all ages. Kids can enjoy the Kids Zone, Carrot-Tossing, Scavenger Hunt and the Gingerbread Man Party, among so many others.

Among the long list of activities to be enjoyed at the convention there’s also much to be won! Other than the most coveted titles of King and Queen of the Redheads, Best Red Dog, Best Red Beard and Best Red Family are just some of the 19 titles up for grabs.