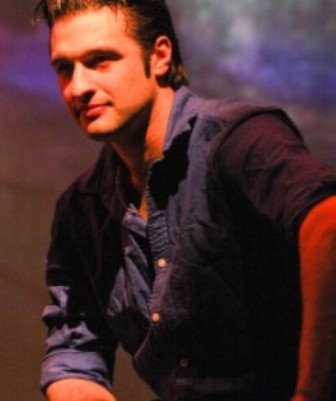 When 28-year-old Brian Cunningham arrived in the U.S. three years ago from Connemara, Ireland, his goal was to introduce sean-nós Irish dance to America. This weekend he takes the stage at the ReJigged Festival in Nova Scotia.

Sean-nós, which means “old style” in Gaelic, originated in Ireland hundreds of years ago but was maintained throughout English occupation by only a few families. It is closely related to tap dance and even Cape Breton step dance. With loose arms and legs, the movements are similar, but shuffles are very different and there is a lot of floating on the heels. Although there are many similarities in style and rhythm, it’s a unique dance form that predates Irish step dance.

Years ago, Irish cottages were built with stone floors and half doors that dancers integrated into their improvised performances along with broom handles. Sean-nós dancers have described the main difference between step dance and sean-nós by explaining that you must dance with the music, not to it.

But as the English occupied Ireland and gained power, they prohibited both sean-nós and house parties in order to prevent the Irish from gathering to make plans against them. Cunningham said Irish step dancing was born from dancers trying to disguise sean-nós by holding their arms straight against their bodies so that English soldiers wouldn’t understand what they were doing.

“There’s a deep story there that resonates with everyone, especially with older Irish,” Cunningham told Celtic Life International from his home in Chicago.

Cunningham teaches classes and workshops, performs in a touring show, and does occasional solo performances.

“When I started performing here, I could see people loving the looseness and wildness of sean-nós right away,” Cunningham said. “And over time, I’ve really seen it grow. More people are taking my classes and a lot more people are asking questions and trying to understand it. The first year was the hardest because nobody knew what it was. They were so used to the Irish step dancing they saw in Riverdance.”

Cunningham has been dancing the Connemara-style of sean-nós since he was five years old. “It’s been in our family for hundreds of years and it’s been passed down for generations,” he said. “My whole family used to dance and I used to watch them. I loved the looseness and the rhythm. It’s such a passionate thing.”

Cunningham studied Irish step dancing for a couple of years at school, but said sean-nós won him over from the start.

“I love the finger roll accordion and tunes like Sally Gardens and Miss McLeod,” he said. “Also, sean-nós is danced mostly solo and improvised. It’s very fast-moving in your head and dancing sean-nós is very exciting and a great feeling.”

Cunningham’s been dancing sean-nós professionally since he was 15 years old with members of his family.

For the past two years, he has been performing in Atlantic Steps, the story of sean-nós he created with U.S. choreographer Kieran Jordan. This show is Cunningham’s main vehicle for introducing sean-nós to North American audiences.

Atlantic Steps tells different stories about what came out of sean-nós. With a cast of dancers and musicians from both sides of the Atlantic and specially commissioned backdrop visuals from Irish artist Vincent Crotty, the show routinely brings spectators to their feet.

“I can say I’m 99 per cent sure that in Chicago sean-nós is going to be huge,” Cunningham said. “It’s made a big blow-up in Ireland too. It’s starting to come back.”

He said Irish television has been actively promoting sean-nós. “They tend to make it flashy. I hope they keep it the old way and tell the story as it was. It’s exciting enough as it is.”

Preserving sean-nós is important to Cunningham. “That’s what we listened to to get to where we are today,” he said. “There’s a very good job getting done on [the promotion of sean-nós]. The old style is so important. If a fun flavour is put on it in the right way, it will bring people into the culture.”