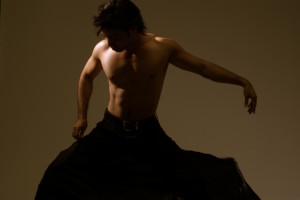 Young artists around the world are vital, vibrant vignettes in a contemporary Celtic collage. In the first of a four-part series, Celtic Life International examines the state of the Celtic Arts today.

Joel Hanna snaps his head back and breathes deep before launching himself across the smooth wooden floor, a sudden whirlwind of arms, legs and torso twisting and turning under the unforgiving glare of studio lights.

The Vancouver-based dancer is preparing for three weeks of Riverdance rehearsals in Ireland this fall.

“That was better,” he puffs aloud, wiping the sweat from his brow and adjusting his black robe. The simple gown, which resembles a 16th century Celtic courtesan kilt, is worn en homage to his heritage.

“My Father is Irish, and my mother is from the Philippines,” he says later over the phone from his home in Vancouver. “It’s always been a somewhat sensitive subject, especially growing up in the Irish Dance community. Back then, I was the only male Asian-Irish dancer. Now, that kind of mix is much more accepted in this discipline, but until recently it was really just something that people of Irish descent did.”

For Hanna, and for thousands of other Celtic artists around the world, the recognition that they – and their work – now belong to something greater than themselves is a testament to the times.

It also speaks to the adage that art is more than a mere flowerbed along the road of life – it is a window to the soul, a visible link in a chain of unconscious events, and a mirror upon which we reflect.

As such, the Celtic Arts – and thus the Celtic identity – is a living, breathing force, constantly evolving.

“When I started creating and producing my own work, I wanted to do something truly different,” says Hanna, who incorporates elements of traditional Irish dance, modern step, tap, flamenco and martial arts into his own unique mélange of motion. “But doing something different for the sake of it being different is pointless. Like making a mess just because something is clean, or breaking something because it’s working.”

He quotes famed martial artist and film-star Bruce Lee, who Hanna says was always looking for “the perfect expression”; Man, the human being, the creative individual, is always more important than any established system or style.

That creative process, he explains, is as much inspirational as it is perspirational.

“It’s almost scary sometimes. For example, last summer I was invited to create a piece for a showcase called “Choreography on the Edge” in New York, and I spent a long time just exploring music and ideas, until I found the “right” direction and feeling I wanted. I could see it and hear it in my head, but I was terrified because I didn’t know if I would be able to do it. In the end, it was exactly what it was supposed to be, and it felt wonderful, and every dancer in the piece and the audience felt it too – that magic.”

He notes that the decision to merge artistic disciplines and styles was not a conscious one.

“It just happened. I wanted to see if it was possible to tell a story using the language of Irish dance, the fluidity and energy of long-form kung fu, with a rhythmical voice – something that might not be separated or governed by the body’s movement , but would be a key part of it. At that point the lines became so blurred that it didn’t matter anymore what shoes I was wearing; rhythm was rhythm and music was music. To me they are synonymous universal laws, not unlike mathematical equations or Pythagorean tuning. The variables are the people expressing them.”

Those variables are vibrating across the planet.