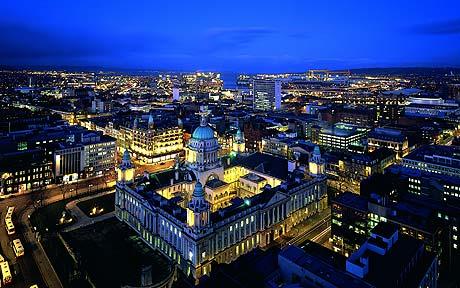 After a short and scenic train ride up from Dublin – which included being strip-searched at the border (no extra cost) – I am in Belfast. The gentle mist and soft rain is a bizarre backdrop to the Troubles; soldiers and armoured vehicles roam the streets, military helicopters drone overhead, and sirens wail as local residents pass through a maze of gated checkpoints across the city core. The mood is tense, taxing, and everyone seems on edge.

The twenty-five minute drive from Belfast International Airport into Northern Ireland’s capital city is a revelation; it has been twenty-five years since my last visit here and – except for the gentle mist and soft rain – it is a changed country.

My first journal entry from that trip north (above) seems surreal now; gone are the guns, the soldiers, the armoured vehicles. There are no roadside checkpoints, nor blockades, nor buzz of black helicopters.

Instead, the road into town is a sea of shiny, silver SUVs, BMWs, and Mercedes. Yellow construction cranes abound, with new residential and commercial sales booming. Older homes and buildings are surrounded by red scaffolding, undergoing extensive and expensive renovations.

Pulling into Belfast, the rain is heavier, and I lurch to get my luggage into the luxurious Malmaison, one of the city’s many new high-end hotels.

Soon after, umbrella in hand, I am exploring the city, astonished by what I discover; stylish boutiques and nouveau cuisine aside refurbished pubs and churches; the boisterous Cathedral Quarter, brimming with fashionable nightclubs, just steps from the ancient Albert Memorial Clock; an array of foreign accents and financial institutions; smart phones and tablets lighting up the night.

Most impressive, perhaps, is the revamped waterfront. Once the industrial heart of global shipbuilding, and the lifeblood of the local economy, the dockyards are now home to Belfast’s booming tourism, high-tech and film industries. The magnificent, towering Titanic Museum invites visitors to peruse the past in a very present place.

As the city savours the make-over, its residents are enjoying a faith lift; the mood is light, spirited, and everyone seems energized.

The next morning, my driver picks me up. Billy Scott has lived in Belfast all of his life, and testifies to the transformation.

“I’m waiting for the other shoe to fall,” he jokes, displaying dry Irish wit. “Seriously, though, peace has brought prosperity to almost everyone here.”

As if on cue, we wind our way through a myriad of well-manicured middle-class suburbs, replete with new schools, community centers and sporting facilities.

“The standard of living has gone up significantly in a very short time,” shares Scott. “Unfortunately, so have the housing prices.

“It’s been mostly Catholic money,” he continues, quick to add that he has never taken sides. “In truth, they were the ones who stood to benefit the most from the Good Friday Accord, only because they had nowhere to go but up.”

And while the majority of Belfast’s neighbourhoods are now mixed and non-sectarian, shadows of the city’s past still lurk.

Scott steers us up past the Sandy Row, around the Crumlin Road, towards Shankill, a longstanding Protestant holdout.

“There are always a few idiots about in places like this,” he notes, “hardliners who won’t let the past go.”

The contrast is striking; drab and decaying homes are coloured-over with massive murals and Union Jacks.

“There’s no money here anymore,” he continues. “This neigbourhood was built on the backs of shipbuilders and mill workers. For generations, there was no need for an education, because you were guaranteed a job if your dad and granddad had one. But that work is gone now.”

Just a few blocks over, in the Catholic Falls Road district, the story is similar; pro-democracy propaganda is pasted over old, broken down buildings, and barbed wire sits atop crumbling walls.

“Political tourism,” explains Scott. “Tens of thousands of visitors now come through these communities each year. Some have roots here, others have a historical interest. Whatever the reason, it’s been good for business.”

Rebranding the Troubles has been part of the country’s efforts to reconcile its recent past.

There are still small sectarian flare-ups, however, including a skirmish the previous evening between a handful of Loyalists and Nationalists in front of City Hall as part of ongoing “flag protests”. Interestingly, though law enforcement officials were on hand, the scuffle was self-policed.

“Blame it on the booze – the bars had just let out,” laughs Scott. “But it just goes to show you that people here will step in to stop that kind of nonsense now. They aren’t willing to let anything muck with their good luck.”