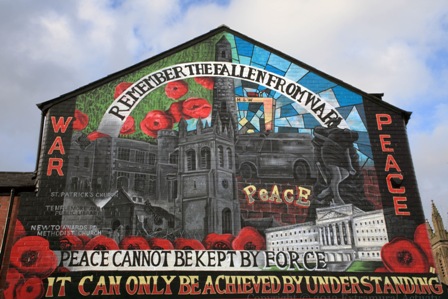 An amazing day spent travelling through the towns of Strabane, Omagh, Enniskillen, Portadown, Armagh and Newry. The Ulster countryside is like no other, and there is as much raw physical beauty in the six counties of Northern Ireland as in the twenty-six south of the border. Hard to believe this is ‘bandit country’ – like a thorn on a rose.

From Derry, we head south. The sun appears and dissolves the morning mist, exposing vast pastures of farmland, rivers, and, all around us, rolling hills.

The Donegal border is less than a mile to the west. Twice we are forced to cross over into the Republic, as police and traffic block the main highway. Going over the border is a non-issue now; there are no patrols, checkpoints, or even a single sign post indicating that we have entered another country.

“Maybe there’s been an incident,” muses Ken each time.

His hesitancy is understandable. While things have changed drastically in Northern Ireland over the last fifteen years, caution is common, especially among older citizens.

En route to Enniskillen, he lists off the region’s history of horrors – bombings, shootings, knifings and kneecappings – pointing out particular locations as we pass. It is almost impossible to fathom that a land of such splendour could have known such terror.

I recall author Leon Uris once calling this land ‘A Terrible Beauty’, and perhaps nowhere is this adage more apt than in County Fermanagh, home to the lovely Lough Erne and its 154 islands. With waterways that wind more than one hundred miles, including a sizeable stretch west to the Atlantic Ocean, the region is ripe with visitors year-round. Summer is especially busy, as boaters bring a boom to the local economy.

Enniskillen was also the scene of a savage IRA attack. On November 8, 1987, 11 people were killed and another 63 injured when a massive bomb detonated during the town’s Remembrance Day ceremonies. The ensuing outrage from all sides was so severe that many see the incident as a turning point in the Troubles.

A simple memorial stands in honour of those who fell.

“I don’t know anyone that wasn’t touched by the tragedy,” says Anne, who wished to remain anonymous for this story. “We were there that day. My husband and I helped carry bodies out of the rubble.”

It time, the community came together to heal.

“I was putting the laundry out to dry one morning – this was about five years after the bombing – and I started talking to my neighbor through the fence. Even though we were from different backgrounds, we quickly realized how much we shared in common.”

Within weeks the pair had set up a support group for survivors.

“It was important – no, it was essential and necessary – for us to share our thoughts and feelings about what had happened. Wounds fester in the dark, but they evaporate when exposed to the light.”

While she has not forgotten the terrible event, Anne says that she has forgiven those behind it.

“I’m not one to carry that weight around with me,” she shares softly. “After the anger fell away, the hurt set in. And then the hurt fell away.”

On the ride back to Belfast, knowing that we are soon to part ways, I ask Ken what it will take for Northern Ireland to keep the peace and prosperity.

“It’s a matter of trust,” he continues. “Trust in ourselves, trust in one another, and trust in the process. Trust takes time.

“As for the talking, well that’s not a problem; after all, we’re known to have the gift of the gab.”

Ironically, we sit in silence the rest of the way, each to our own thoughts. Back in Belfast, we bid our adieus and promise to keep in touch. And we have.

The next morning, on the ride to the airport, I pull out my journal from 1989 and read the final entry from my previous visit here.

This most beautiful country of land and hills, lakes, sea, and sky, these most beautiful people, warm and wise, rugged, resourceful and resilient; you are in my thoughts and prayers, my head and heart, now and always. The past, present and future are yours. Choose wisely. And if, perhaps, you never change, please know that you have changed me forever. And if, perhaps, you evolve and finally find peace, please know that we have done so together. I, and the world, will be watching.