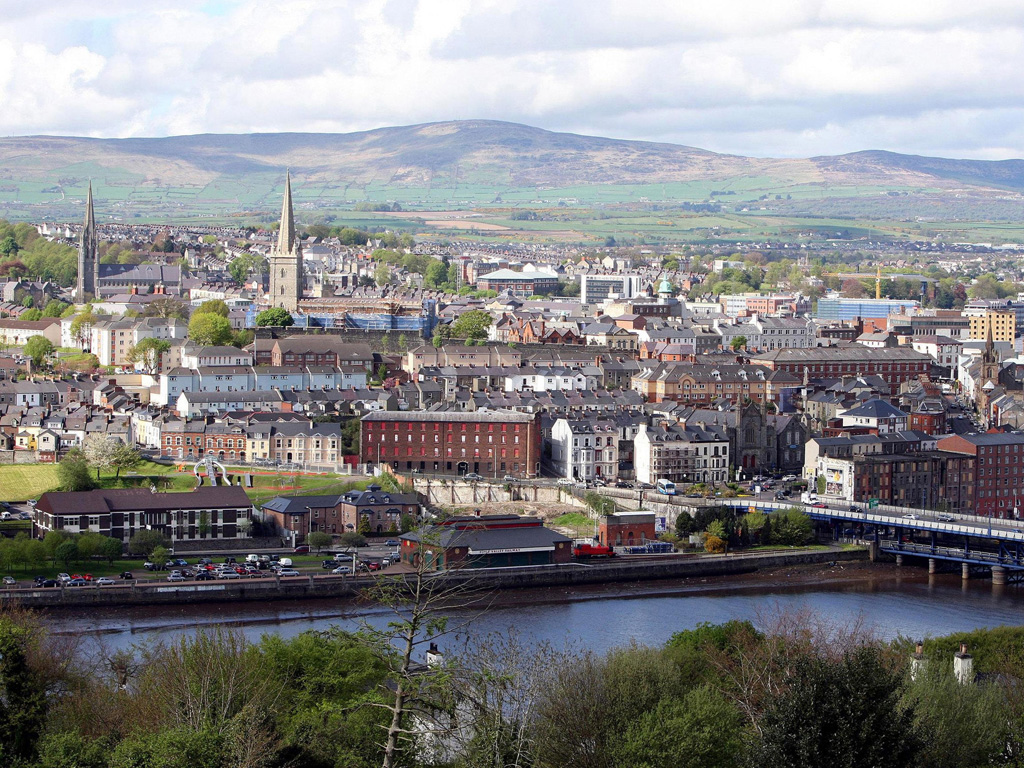 Rough day in a rough part of the region. First, I am given the boots when I try to cross the street during an Orange Day Parade. Later, I am mugged by thugs in the Bogside, who walk off with my wallet and camera. Are these the trials of traveling, or merely the tribulations of not using my head? I have no one to blame but myself for the bruised body and wounded pride.

Ken laughs when I read him my journal entry from a quarter-century ago.

While my scars have since faded, my memories have not, and as we pull into the historic city of Derry – officially Londonderry – the recollections come rushing back.

Perhaps more than Belfast, Derry has come to terms with its long and difficult past, even embracing it as a vital part of its identity. History is alive and well here, carefully woven into the fabric of everyday life.

The city was a flashpoint for the Troubles, starting in 1968 with the formation of the Northern Irish Civil Rights Association, which sought – peacefully – to improve the quality of life for area Catholics. Instead, what followed were thirty years of senseless sectarian violence and bloodshed.

There was fighting in the streets long before that, however, and Ken details the 1609 Plantation of Ulster, the Irish Rebellion of 1641, the 1649 Scottish Presbyterian blockade, and the Siege of 1689.

A quick visit to the multi-media Tower Museum affirms the accounts, as does a tour of the Guildhall, home of Derry’s city council and Mayor. Opened in 1890, the spectacular structure has since survived fire (1908) and two bombings (1972).

It is on the streets, however, where the past most permeates the present; the old cobblestone roads, stone mason buildings, and grand Cathedrals are all in use, as are the stoic Walls of Derry.

Built between 1614 and 1619, the historic monument is almost perfectly preserved today, providing a panoramic perspective of city. From there, I look out over the Bogside, the once impoverished community of my mother’s ancestors (Dunphys from Kerry, many of whom who came north during the famine and married local Dohertys).

Like parts of Belfast, “the Bog” has kept its murals and monuments intact, looking to prosper from political tourism. And, also like Ulster’s capital city, there are still a few hardliners here, though they are now the minority. Tellingly, the old Sinn Fein/IRA headquarters at the heart of the quarter is now an upscale Inn with a bustling bar and restaurant.

Also visible from my vantage point is the newly constructed Peace Bridge, which connects the mostly Catholic city core with the Protestant Waterside community across the River Foyle. It is a powerful image – the link is packed with pedestrians and bikers going to and fro.

Another poignant symbol, the bronze statue Hands Across The Divide by local artist Maurice Harron, stands by the bridge.

“Peace has done wonders for this place,” notes Ken. “It might seem as familiar as always, but you wouldn’t recognize it now if you tried.”

My wise guide speaks truthfully, the difference being most notable with residents, who walk with calm and confidence.

“We’ve become an international municipality,” says Mayor Martin Reilly. “Over seventy different languages can now be heard here on any given day, and we have one of the U.K.’s most thriving arts scenes.”

Named an International City of Culture in 2013, Derry is picking up where it left off last year; the list of festivals, concerts, exhibits and events scheduled for 2014 is impressive.

“There is a youthful enthusiasm here today that I have never felt before,” continues Reilly. “It is as if we have awoken from the deepest slumber – a nightmare really. And it is the young people – the artists, the entrepreneurs, the dreamers and doers – who are driving the growth.”

The numbers support the Mayor’s claim; over 71 per cent of the local population is under the age of fifty, with more than a third below the age of twenty-five.

“A lot of them are simply too young to have a full recall or understanding of the Troubles,” he adds. “Gratefully, they don’t have to live our history to learn it. And not only are they embracing our past, they are building upon it in their own manner. The scars will fade with each generation, but the memories will not.”