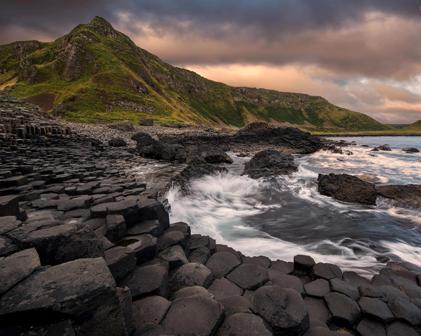 Hitchhiking north to the coast, I catch a lift with George McGuinness, who delivers bread each day to villages between Belfast and Derry. I ask him, given the Troubles, why he continues to live here. He does not reply. He doesn’t need to. Over the coming hours, my eyes take in the breathtaking beauty of his homeland.

I lucked out with Ken McElroy. An author, playwright, poet, philosopher, humourist and sporting aficionado, my driver and guide for the next few days was recently awarded an MBE for his contributions to tourism. The experience is sure to be engaging, entertaining and educational.

Ken’s warmth, wit and wisdom are welcome as we weave our way through the tender Glens of Antrim. He points to this and that, regaling me with tidbits of history. The grassy knolls are peppered with small farms and streams. It is an outdoorsman’s dream, he tells me, ideal for fly fishing.

Later, we hug the ocean on the Causeway Coastal Route, named one of the world’s top five road trips. It’s easy to see why; the seaside settings are picturesque, with a stirring view of Rathlin Island, just six miles north. Look a little farther, and the southernmost tip of Scotland’s Kintyre Peninsula comes into focus.

The rugged Ballintoy Harbour is our first stop, one of several location sites for HBO’s hit series Game of Thrones. The parking lot is teeming with tour buses, so I sniff the salty air and take a few quick photos before we move on.

Not surprisingly, just a couple of miles west, the Giant’s Causeway is equally busy. We escape the visitor center, strolling a few hundred yards down the bluff towards the awe-inspiring seascape of hexagonal basalt columns.

As the surf pounds the shore, Ken tells me about the “Wreckers”, locals of years past who would use luring lights to deliberately steer passing ships into the rocks before looting them. The waters off Northern Ireland, he says, are among the world’s largest ocean graveyards.

An hour later, my trusted guide again brings history to life at Dunluce Castle, a now-ruined 13th century stone structure overlooking the sea. Fact is as engaging as fiction here, with stories of ghosts, Earls, Kings, Queens, Spanish sailors and two now-infamous battles between the McQuillans and the MacDonalds offering valuable insight into the region’s fascinating past.

In the town of Bushmills, home of the world famous Whiskey distillery, local residents watch travelers come and go. The four-star, 400 year-old Bushmills Inn is bustling, mostly with golfers itching to improve their handicap at the nearby 36-hole Royal Portrush Golf Club, ranked one of the top courses on the planet.

Ken theorizes on the region’s exploding popularity. “For a long time, the only news that came out of Northern Ireland was bad news, and many people have told me they were simply too afraid to come here because of the conflict.”

Later, over excellent fish ‘n’ chips and Guinness in Portballintrae, I ask him why, given the Troubles, he continued to live here. He does not reply. He doesn’t need to.