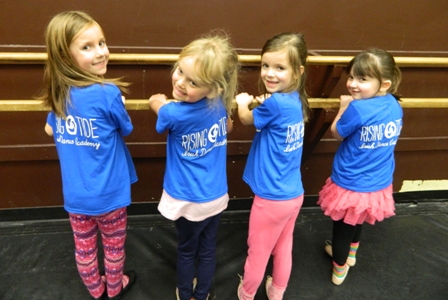 In fact, the two Nova Scotia women are so passionate about Irish dancing that they have made it their business to popularize the form – literally – opening Rising Tide Dance Academy in Halifax this past January.

“Compared to many mainstream styles of dance – like ballet or contemporary – Irish dance is relatively unknown,” says Nickerson. “That’s our biggest challenge; Irish dance offers so much and can be so rewarding, but it hasn’t earned the same popularity as other styles yet. Part of our mission is to elevate its profile and bring more awareness to the activity.”

Currently, the new school caters to both beginners as well as competitive dancers, some of whom have been involved in the form for a decade or more. Chapman notes that many of their students began because of a connection to Ireland, while others are trying it out, in the process discovering a fun, physical, dance style. “And everyone is welcome,” she says, “regardless of whether you’re Irish or not.”

For those who become involved, the rewards are substantial; participants can take the form in a number of directions, including competition, recreational dancing, performing as a soloist or in a team, or dancing in hard shoes with taps, or soft shoes such as leather slippers.

“Irish dance teaches dancers about Irish culture from the dancing, to the music, to the history, but it also teaches them about discipline, sportsmanship and confidence,” Chapman explains. “Being able to offer students an activity that includes all of that, plus fitness, is rewarding as a teacher.”

Both women know more than a bit about discipline, sportsmanship and confidence.

Chapman took her first dance lesson at age 12. She attributes her late start to the fact that she’d been living in Kuwait with her family for the previous two years. Upon returning to Nova Scotia, she simply wanted to try any type of dance. “I enrolled in a city recreation program for Irish dance and was hooked.”

She went on to study Irish dancing in Dublin, and to perform in productions like the Royal Nova Scotia International Tattoo and the Polizeishow in Hamburg, Germany. However, one of her greatest accomplishments was earning her Irish dance teacher’s certification in 2013 – the exam was so demanding that it took her a couple of attempts to pass it.

By turns, Nickerson has loved to dance since she was three. When she was eight, she accompanied a friend to an Irish dance class, and has been devoted ever since.

She has studied dance in Toronto, Nova Scotia and Northern Ireland, and has competed locally, nationally and internationally. “One accomplishment I’m particularly proud of is getting to compete at the World Championships in Belfast and in Philadelphia,” she shares, “something only a small number of dancers get to do.”

For Chapman, what began as interest in dance has grown into an obsession. “I couldn’t imagine my life without dancing, which is part of why I got into teaching, because it allows me to keep Irish dance in my life every day. Irish dance has also brought me so much love for Ireland and Celtic culture in general. Being from Nova Scotia, we’re exposed to Celtic culture already, but the connection I feel to Ireland is strong – and it’s because of dancing I consider myself very much an ‘Irish wannabe.’”

Nickerson reveals that as she has grown older, what interests her in dance has changed. When she first began, she loved how different Irish dance was from ballet – the fast feet, the jumps and the new skills. “Now that I’m a teacher, I love getting to share my love of all things Irish with my students. Celtic culture is a way of life in Nova Scotia. I like that I have a role in shaping and inspiring a love of that culture in others.”