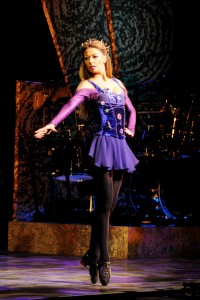 Riverdance star Caterina Coyne will miss the exuberance of North American audiences, but there will be new national quirks to discover as the cast of the perennially popular Irish show dances on to seduce fresh nations.

Riverdance has been seen many times in North America since its premiere in 1995, but the show moved on to new markets this past June.

“I’ve grown to love this part of the world,” says Coyne by phone. “In North America, audiences are so vocal about how much they love the show.”

Coyne has traveled with Riverdance for 7.5 years, five of them as a lead dancer in the North American production. For her and other cast members, there’s a touch of nostalgia in these farewell tours.

“North American audiences are very expressive and dance in the aisles. It’s a contrast with some other countries, especially in Asia, where people are much more reserved and clapping during a performance is considered disturbing.”

Riverdance was developed from a dance segment performed at the 1994 Eurovision Song Contest. The piece featured well-known Irish-American dancer Michael Flatley and his partner Jean Butler, and was the brainchild of Moya Doherty.

The dance segment was a huge success, and Riverdance was subsequently created by composer Bill Whelan (who won the 1997 Grammy Award for Best Musical Show Album) along with Doherty, acting as producer, and director John McColgan.

Shawn Silver, a Newfoundland-born dancer who’s performed with Riverdance and now runs his own company, iDance, says the production has universal appeal because the bass rhythms and foot stomping patterns of Irish dance speak to our instincts.

“People feel an innate spiritual connection to the percussive rhythms and ancient melodies. We have a natural rhythm and tempo and somehow these bass rhythms strike a chord,” says Silver.

The Irish have been dancing for centuries, Silver says, and have recorded steps that are hundreds of years old.

“Prior to Christianity, the druids and pagans did ring dances and group dances. It’s also been said that during times of invasion men would stand on wooden surfaces and tap out signals to one another.”

Riverdance uses the hands and arms more than is common in traditional Irish dance. The show also breaks with tradition in the way dancers look, eschewing elaborate hairstyles formed of wigs and ringlets, for a more natural look. The core of the show, though, remains authentically Irish.

The show’s global appeal is boosted by the participation of tap and flamenco dancers. In North America, tappers Benjamin Mapp and Jason E. Bernard along with flamenco dancer, Marita Martinez-Rey have added colour and depth.

These dancers help tell the story of Irish emigration to North America. Their segments demonstrate the physical and psychological blending of the old and new worlds. The show’s initial scenes are set in ancient Ireland, where the ancestors rejoice in the sun, the moon, the elements and the seasons. The show then moves on to the emigrant experience. Finally, the children of the emigrants return to the homeland, and a new people who speak with a global voice arise.

For Coyne, an award-winner who began dancing in Galway at age four, Riverdance has provided a rewarding career.

Becoming a lead dancer five years ago put a little extra pressure on Coyne’s slim shoulders but she enjoys the challenge of heading up the show and representing her country and culture.

“It’s a good feeling, good nerves and good energy. You need that energy for a good performance. The adrenaline makes the show, and the audience feeds the energy.”

The show has three sets of lead dancers, so dancers are able to rotate and take breaks. But the 29-year-old works hard to stay in peak form.

“Your career depends on how you look after yourself,” she says. “Dancers today, train like athletes. When we’re not performing, we’re in the gym or doing yoga, trying to stay injury free.  It’s important if you want a long career as a dancer. I hope to stay in theatre arts. As long as I love it, I’ll keep doing it.”

For Silver, Irish dance is as much sport as art.

“It’s an incredible illusion of the feet and feast for the eyes to make something so athletic and difficult look simple,” he says. “It draws entirely on core strength and Irish dancers train like Olympic athletes. In today’s world, Irish dancing is a sport first and foremost.”

After so many years on the road, Coyne is accustomed to being away from Ireland. Homesickness is alleviated by her love of travel and the presence of her fiancé, the show’s drummer/percussionist Mark Alfred.

“I love traveling, it’s a perk,” Coyne says. “I’ve been very lucky to make a career from Irish dancing. I don’t see it as a job. The fact I’m in a show like this is very special to me. I see myself as an ambassador for my country.”

She is looking forward to future Riverdance performances in Belgium and Asia, and possibly South America.

But it’s only natural that she misses Ireland and Galway at times.

“Ireland is my home and always will be. I live by the sea, so I always think of that beautiful landscape. And I miss a good cup of Irish tea.” ~ By Carol Scott