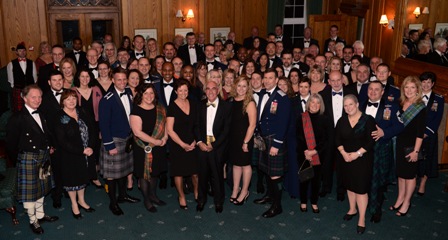 Prepare the haggis! All over the UK, and well beyond, preparations are underway for the annual celebration of Scotland’s best known son, poet Robert Burns. As is tradition, hundreds – if not thousands – of Robert Burns suppers will take place throughout the UK around the bard’s birthday, January 25th. And what was once just an UK tradition has now spread around the world as people in countries diverse as Australia, Canada and Jamaica celebration the poet.

Burns was born in 1759 in the village of Alloway (now a suburb of Ayr), Scotland, and died on July 21, 1796 in Dumfries. Though only 37 at the time of his death, Burns did not fritter away his life.Considered a pioneer of the Romantic Movement, Burns wrote hundreds of poems and songs; sometimes in Scottish Gaelic, sometimes in English and sometimes in Scots dialect. Burns, who sired 12 children through four women including his wife, was first honoured in the 1800s with a supper in his memory.

In fact, the first Burns supper ever recorded dates back to 1801, on the fifth anniversary of the bard’s death. That was when nine of his friends met to commemorate his work. The group agreed to meet again on his birthday to repeat the celebration.

Today, the national poet of Scotland is honoured all around the world every January, with countless suppers held in his honour. They all more or less follow the same storyline. Traditionally, the events include piping in the official party, an official welcome from the chairman of the supper, piping in and addressing of the haggis before a toast to the haggis. Next up is the meal, the Immortal Memory (an account of Burns’ Life offered by the evening’s main speaker), a Toast to the Lassies and a reply to the toast. The evening is filled with singing, dancing, readings from Burns’ works, and capped off with the singing of Burns’ Auld Lang Syne.

Arthur Bogues, Justice of the Peace, is the Honourary Secretary and past Vice-President of the Jamaican Caledonian Society, based in Kingston, Jamaica. The society is currently preparing for its own annual Burns supper. “The society is more than 150-years-old, and we’ve traced the Robert Burns suppers back to the 1930s,” said 41-year-old Bogues who was born in Victoria, B.C to Jamaican parents.

With Scottish grandparents, it’s hardly surprising that Bogues is so deeply invested in his Scottish roots.“Jamaica has a stronger Scottish influence than the English do,” explained Bogues. “We have a really rich Scottish heritage down here. Even a lot of the street names are Scottish.”

The society’s annual eventattracts an assortment of people.“We get a lot of expats from the British High Commission, and lots of Jamaicans with Scottish descent,” said Bogues, noting the Burns supper is very traditional in nature. “We had a major distiller the year before last that came in from Scotland for a whiskey tasting,” he said. “And we have an active Scottish country dance society that comes and does a performance.”

Scotsman Charles Adamson is also a member of the Jamaican Caledonian society, and is already looking forward to the 2015 celebration. Although numbers have dwindled over the years, Adamson expects there will be a fair attendance at this year’s event.

“Last year we did not have a supper, the year before was 50 and in earlier years we had up to 1,000 people,” said Adamson who has participated in the event for 10 years. “Up to now it has been traditional with the expected speeches and after the Scottish Country Dance Society performs as well as soloists. This year the committee has decided to include a modern entertainer.”

To some, Jamaica may seem like an unusual place for a Burns supper but logic dictates otherwise.“Wherever Scots or descendents of Scots live and work, there are Burns suppers,” said Adamson who came to Jamaica in 1969 after responding to a job advertisement. He has lived in Jamaica ever since, except from a short stint in Saudi Arabia from 1980 to 1984.

Bogues pointed out that regardless of how small or large the attendance at the black tie/highland dress affair each year, the end result always seems to be the same.“Everybody thoroughly enjoys the evening,” he said. “It’s always a really great time.”

Robert Burns suppers have also long since cropped up in Australia, where many Scottish societies and federations continue to host their own annual events.“In Victoria, commemorative functions to honour Robert Burns have been held continuously since 1836,” said Noel Wright, co-ordinator of the Scottish Resource Centre in Melbourne, Australia, which the Scots of Victoria Co-ordinating Group (SVCG) runs. “One example is the First Burns Festival conducted by the Melbourne Scots on the 24thof January, 1845.”

The current Robert Burns Club of Melbourne has been thriving since it got its start in 1950, said Wright. The 2015 celebration will be the group’s 65th annual Burns supper. The Brunswick Scottish Society, the Mornington Peninsula Caldedonian Society and the Bendigo Robert Burns Club also hold traditional annual Burns suppers in Victoria, noted Wright.

“Scottish immigration to Australia began in 1814 and between 1815 and 1914 over 500,000 Scots came to Australia and New Zealand,” explained Wright, who pointed out that about eight per cent of all Australians claim Scottish heritage.“People attending these suppers range from Scottish-born to the general public who enjoy Scottish events. And yes, everyone partakes of the Haggis.”

Gillian Leitch, possibly Canada’s greatest haggis enthusiast, is a member of the St. Andrew’s Society of Montreal.“We were founded in 1835 and in the early ‘70s we took over the Burns supper from the Caldedonian Society of Montreal,” said Leitch who is the Activities Chairperson and Historian for the society.

“It’s a traditional supper that will take place on January 23rd at the University Club,” noted Leitch who anticipates an attendance of 70 to 100 people.Leitch not only appreciates the suppers as a way of celebrating her Scottish rootsbut also because they provide an opportunity to enjoy a serving of haggis.

“I like haggis, and when I tell people that they think I’m either lying or I’m a really strange person,” she laughed. “This will be my seventh Robert Burns supper and I am already looking forward to it. People always have a really great time.”

The celebration of Burns has of course long since made its way into the Big Apple.Alan Bain, Chairman of the American Scottish Foundation in Manhattan is one of the countless ex-pats whois in the habit of commemorating the bard every January.

“We are celebrating our 20th anniversary hosting the Burns night at a private club in NYC,” said Bain who has presided over the foundation since 1993. “We typically get somewhere between 200 and 230 people who attend. It’s a black tie, highland dress affair in a very elegant most magnificent room.”

The foundation’s 2015 supper is scheduled for January 16.“One of the interesting things is that this is an Americanized Burns night,” said Bain, who noted the change from tradition occurred after three years to accommodate those not well acquainted with the Scottish bard and his life works.

“We have the toasts sung with Scottish singers performing for us,” said Bain. “The address of the haggis is used as a little bit of an intro to Robert Burns and then it’s sort of acted out. We don’t have the immortal memory. We have a male and female singer performing duets.”

Little Fire, a 25-year-old singer/songwriter from Scotland will perform at this year’s event, while traditional dance will also be one of the evening’s highlights.“We actually close with reels, and people love that,” said Bain. “It’s a really fun evening. The guests get piped in, the haggis gets piped in. It’s a real slice of Scottish life that people get used to.”