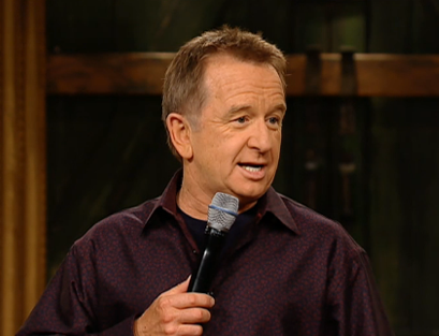 Driving himself from gig to gig across Canada, comedian Ron James describes himself as a “boutique operation,” who can tell you all about the rigours of the road. Only half-joking, James says he’s been stuck in primal blizzards a Yeti wouldn’t wander out in and stayed in motels Norman Bates wouldn’t be caught dead running. “Canada is the largest national land mass on Earth and I’ve been running my trap line across it for 15 years,” James declares. “Even though the hotels are more comfortable now and my car is cooler, I’m still logging the kilometres on highways glazed in black ice to get to the gig. It’s been a rewarding ‘white knuckler’ of an adventure.”

Indeed, it has: born in Glace Bay, Cape Breton in 1958 and educated with a BA in history from Acadia University in Wolfville, Nova Scotia, James has become one of Canada’s best known comics. Comedy is a calling, according to James, and while he says he always draw laughs growing up, he didn’t commit until after university when he joined Toronto’s famed improvisational troupe, Second City, staying with them for a decade. Along the way he performed in film and television, with roles in Tommy Boy and Robocop, to name a couple. He appeared before 4.7 million television viewers in 2004 when Conan O’Brien filmed in Toronto, is now heading into his fifth season with his own titular television show, and still tours regularly.

The rewards for all this hard work are many, James says, not the least of which is “the obvious one of seeing a packed theatre laugh their arses off.” More seriously, James is grateful to be carving out a career in a profession that doesn’t suffer fools. But the best part of his work is the discovery of people and places across Canada. “From Cornerbook, Newfoundland to Courtney/Comox, British Columbia, I’ve heard the authentic heart line hum of country beneath my wheels. “It’s a primal pull that grounds me to something far greater than they myopic pursuit of the showbiz grail.”

James doesn’t view comedy as a means to an end, but a way to explain the world in which he lives. Along the way, he’s been able to hone his delivery. Early on, the comic says he approached every performance like a welter-weight before a fight and viewed the audience as opponents he need to pummel into submission. These days James is “more comfortable in his own skin” up on stage and enjoys the experience more.  But he doesn’t want you to think he’s becoming complacent either. “Don’t get me wrong,” James says. “I’m still killing, but I ride the waves differently. I’m still nervous when I step out there, but it’s a nervous enthusiasm for the two hours I’m about to experience and not a nervous anxiety.”

Working out material comes a bit easier these days too, but James concedes writing is still 70 per cent perspiration. “The artist who waits for that eureka moment of inspiration doesn’t eat,” he quips. “Plus, I love the way words trip off the tongue and tickle the ear as well as the funny one. So I labour over rhythm, punctuation and clarity.”  James says a lot of his material moves straight from the page to the stage, particularly with television, because of the ravenous medium’s appetite for content. But nothing hones the material like the road, the comic says, noting that live performance gives the work an edge a paying audience deserves. “I detest lazy comedy and sloppy delivery. If someone pays $50 to see you, they’d better get a show.”

Generally, Canadian comedy has never been more fertile, James says, and he calls the level of talent and commitment to the craft comedians are currently showing inspiring. Toronto is the proving ground for young comics, but it’s also a supportive and nurturing environment, contrary to its reputation as a “shark-infested environment.” That said, he points out comedians, like any other art form, needs support, something he believes isn’t financially forthcoming from the current government.

In the immediate future, James’ fifth season of his television show kicks off in February, immediately following the Olympics and thus likely guaranteeing him a huge audience. That same month, he’ll start his second leg of his national tour with 20 dates across Ontario. If the series gets picked up for another year, he’s back in the “writing room,” and if not he plans to write his own book. “Either way, I’ll be doing what I do and following my bliss.”