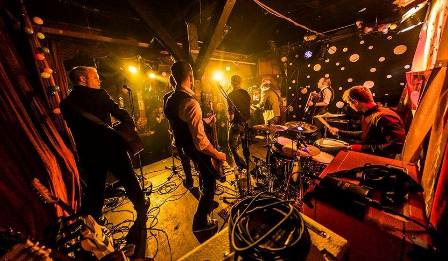 Don’t let the fact that they’re Danish fool you: Celt-Rockers Rovers Ahead play a vigorous brand of what the eight-piece band calls “pub-punk.” As a group, the band declares that its music harnesses the energy of punk and the soul of the Irish song, drawing on influences such as The Pogues and The Dropkick Murphys in order to write songs about “drinking, whoring, family tragedies and lost love.” Did we mention they’re Danish?

Truth: the entire band is Danish – except for co-founding member Nathan Corcoran, whose parents hail from Dublin. Corcoran was born in Denmark, but has lived in both countries. Music was his passion from a young age and seven years ago Corcoran decided he wanted to form an Irish folk punk band. He met Lasse Lund Elmer, who wanted to play punk and that sparked the genesis of Rovers Ahead.

Corcoran says that growing up with Irish and Celtic music sent him searching for other musical genres, until it dawned on him that’s where his heart is and, musically, where he belongs. For his part, Elmer says his family listened to a lot of Celtic music as well.

”When I got into punk, it was part of my rebellion to frown upon my parent’s music and therefore I regarded Celtic music as a thing of the past,” Elmer says. “It wasn’t until the Dropkick Murphys put out Sing Loud, Sing Proud that I discovered my love for punk could be combined with my roots.”

Now, with its debut album in the bag, Rovers Ahead is looking forward to spending the summer on the festival circuit before returning to the studio to record its sophomore effort. Along with that, the band has two songs forthcoming on an Irish folk-punk compilation called The Black Project, which is a Johnny Cash tribute record. Corcoran concludes, “From the minute we start, it’s a party and everyone is invited.”