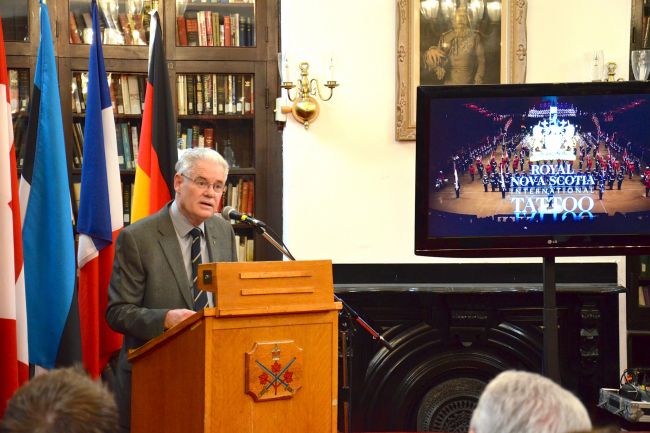 Tradition, history, heritage and culture come together in Halifax this week, as the Royal Nova Scotia International Tattoo celebrates its 36th anniversary! The event’s Associate Producer Jim Forde gives us the details.

What are your own roots?
I was born and brought up in British Columbia and adopted at 9 months of age. My adoptive parents were of German and Irish or possibly English Heritage. I was told that the “Forde” family emigrated from Ireland, first settled in Ballshover, Ontario and that they added the “e” to their name to distinguish between another family of Ford’s. I have no idea when they made their way west. I also know that there is a “Forde Abby” in Devon, England so perhaps they were from there.

When and why did you get involved with the NS Tattoo?
I first got involved with the NS Tattoo in 1979 as a member of the Stadacona Band. The Stad Band, as you know, has been the “pit band” at the Tattoo since the beginning and has only ever missed one year when we were in Europe. I became the Director of the Stad band in 1988 and conducted the band in the pit at the Tattoo for the next 5 years. In early 1994 I retired from the regular force and became a reserve officer with Maritime Forces Atlantic, first as the Tattoo Support Coordinator and later as the MARLANT Tattoo Senior Staff Officer. I left the navy in 2001 and since then have worked on a part-time basis for the Tattoo Society as Support Coordinator, Production Coordinator and now Assistant Producer at the Tattoo. My part-time position has become increasingly busy over the past 14 years and at times, especially during the run-up to the show, is pretty well full time.

Why is it an important event for the community?
This is an excellent question and one for which there is no short answer. Most importantly the Tattoo recognizes the debt we all owe to members of the Canadian Armed Forces, the Royal Canadian Mounted Police and all those first responders who have dedicated their lives to the welfare and freedom of all Canadians. The Tattoo stimulates patriotism and in my view that is extremely important. The Tattoo promotes Canada’s culture and heritage and celebrates the important role immigration continues to play in this country. The Tattoo celebrates history, music, drama and dance and plays a vital role in educating youth. The Tattoo is community – where military and civilian communities come together to partner in the production of the world’s largest indoor show.

Who traditionally attends the Tattoo?
People of all ages and all cultures attend the Royal Nova Scotia International Tattoo. The appeal of the show is to a wide ranging audience – music lovers, lovers of the theatre, dance lovers and all those who cannot get enough of the Tattoo’s Pipes and Drums. Many of the audience members who attended the first Tattoo in 1970 are still coming – the only difference is they are now 35 years older than when they first attended. Children are spellbound by the show. Many visitors and tourists come to Nova Scotia exclusively to attend the Tattoo and many of them stay on to fully take in our East Coast hospitality.

How has the show evolved through the years?
In every way imaginable – it is a much faster paced show that when it started in 1979, it has more acts, more variety and uses modern technology with a world-class audio system, an enormous lighting grid and impressive video. All of us who work on the show have also evolved – at least I would like to think that is the case!

Will you remain involved with the event in the years ahead?
As long as I am healthy, feel that I am contributing, and as long as there is music, dance and theatre, I intent to be here.

Is enough being done to preserve and promote Celtic culture generally?
Another good question that I will answer with a question: Is enough being done to preserve any form of art, culture and heritage? The short answer is no but that does not deter many wise people, individuals and community groups from doing whatever they can to ensure that all cultures, including that of Canada, flourish as best they can in this country.

What can we be doing better?
We should ensure that public and private schools at every level teach and nourish culture, history and the arts. Sadly, these are the programs that face the largest cuts in our society and this is a huge mistake.