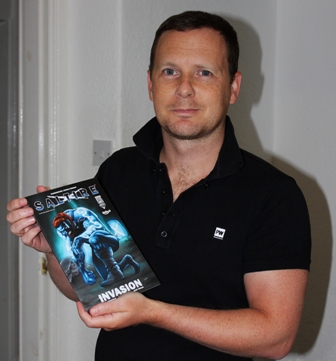 Scotland’s newest Superhero is going to change the way you see Gaelic. Recently we spoke with animator John Ferguson, the tour-de-force behind Saltire!

What are your own roots?
I was born and brought up in the Glasgow area to Scottish parents. I have travelled a fair bit but I love the culture and humour of Scotland so it will always be home.

When and why did you get involved in animation?
I love the comic book genre and decided to create Scotland’s first superhero. I’m a huge fan of Scottish mythology and wanted to create something authentic with a particularly legendary feel. Saltire is a character who represents everything Scottish.

Are they the same reasons you do it today?
Yes, the character and the books have really taken off in Scotland and the history and mythology of Scotland are my inspirations so it is an exciting series to write. It’s a pseudo-history of Scotland so the story is one I love telling.

What are the challenges involved?
Intertwining the historic aspects with the myths and folklore, and then making that engaging to the reader is always interesting. Making a cohesive narrative that feels and reads like a legend can be time consuming, but it’s very rewarding. It’s set in quite a complex world of clans and guardians with a variety of usurpers and villains to keep Scotland from enjoying its freedom.

What are the rewards?
The feedback from the fans, even those who don’t normally read graphic novels, is great. Seeing kids wearing Saltire t-shirts and putting posters on their walls is pretty cool when it’s something I created from my imagination. The creative process is also very enjoyable in itself, making something you know people are waiting on the next installment of, is a great thrill.

Is your creative process more ‘inspirational’ or ‘perspirational’?
It’s mostly inspirational, but there are times when you are bringing the books together and editing when the perspiration comes in. I get inspired by a part of Scottish history or mythology and that gets the creative juices flowing. Coming up with new ideas, or tweaking the historical outcome of events, keeps it very fresh and stops the story feeling restricted.

What inspired Saltire?
A love of the superhero genre, and then reading an article saying that Scotland would be a dreadful country to have a superhero because it was too drab. A typical Scottish attitude of, “I’ll show you” really. Superheroes are essentially modern mythology created in the new world to replace the heroes and legends of the old world. No one has ever created a new hero from the old world, so it has uniqueness.

What is the publication’s core mandate?
Engaging people with Scottish culture and it’s past. The era of the tartan cringe is very much over and “Caledonian cool” is on the rise as Scotland discovers a new sense of itself. We’re going to continue to portray Saltire to an international audience within a very dynamic and modern creative field. We’d like to take this series beyond books and into other mediums. Saltire is an iconic figure who’s ready to rival the Spiderman’s and Batman’s of this world.

How did it all come together?
After creating the world and characters, writing the narrative was the first part. From there I utilized the tremendous depth of artistic talent and expertise within Duncan of Jordanstone, the world renowned art college in Dundee, to find suitable artists. They actually teach comic book studies and bring through a lot of brilliant young talent that we tap into and Dundee has a superb history in creating world famous comics. We set up our own company to publish the books, and so Diamondsteel Comics was born.

What has the response been like so far?
Reviews have been really positive, with comparisons from many to Lord of the Rings, Game of Thrones and Marvel’s Thor. Scottish people have really taken to the character and like seeing a modern and very cool concept based in Scotland that they can really relate to. The first book in English, Saltire Invasion, has sold out many times over in the major retailers and there’s a real buzz about the sequel. The Scottish story is one of the underdog, and people relate to that story all over the world, it’s why the Scottish are so well liked.

What’s next for the publication?
There are eight books in the series, so we have a long way to go before the Saltire story is told. Saltire Annihilation Pt.1 is out on the 6th September with a lot of mainstream press and TV coverage here in Scotland. It is set in the Dark Ages of Scotland and is filled with some of the darker parts of the country’s history and mythology. Translating the books into Gaelic and Scots is also very important to us as we feel it adds to the authenticity of the Scottish mythology. Our first translation, the first Gaelic language superhero comic book ever released, will be launched at the prestigious Edinburgh Book Festival during August and we are really pleased with the interest and publicity it’s receiving.

Is enough being done to promote and preserve Gaelic?
In Scotland, we have new Gaelic schools opened in the two largest cities, Edinburgh and Glasgow, and the interest is definitely growing. It’s something the Scottish Government has championed but it will probably take a couple of generations to start to grow in size once more. We’ll certainly be doing our bit to get the Saltire graphic novels into the Gaelic schools.

What can we be doing better?
I think teaching the language in schools, as an option alongside French, Spanish, etc. would be a great start. Expanding the teaching base is probably where that needs to start. I also think making the English speaking population engage with the language is important, particularly through creative mediums.

Is enough being done, overall, to promote and preserve Celtic culture generally?
Probably not. Older cultures and civilizations are normally glorified and revered, the Romans, the Vikings, the Greeks, etc. but we have an issue that Celtic culture is not. The legends and folklore of the past are important to the psyche of modern Celtic nations but the exposure is not where it should be. The tales of the Gaels, Picts, Celts and Scots are just as fantastic as the great empires of the past, they just need to be explored and utilized.

Again, what can we be doing better?
I think modern mediums like film, television and video gaming need to be encouraged towards Celtic legends and heroes for their source material. That would engage a younger audience and if you can show just how “cool” the legends and myths are, then I have no doubt that exposure would increase. It’s important that dusty old books are not the main source of Celtic folklore and tradition. It needs to be modern, dynamic and engaging, or it will continue to be side lined. Hopefully Saltire can help start the ball rolling.