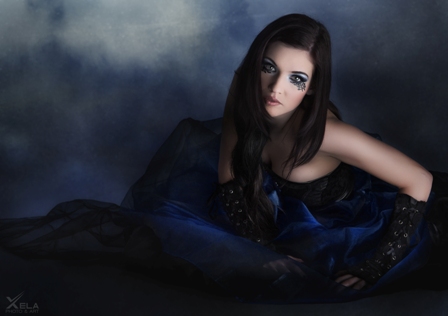 While Celtic music is not inherent to a country like Austria, 25 year-old singer-songwriter Sandra Elizabeth Mae may be the exception to the rule. Recently we spoke with her about her debut recording Hero.

What is your own ethnic heritage?
I was born in the year 1989 in Linz, Austria. My whole family tree consists of mainly Austrians, with some traces towards Hungary. I have always been fascinated by the Celtic culture and history, in books, movies or music, especially the Arthurian legends.

When and why did you start playing music?
I started playing music at the age of eight, accordion and the keys, and asked my parents if I could take music lessons. Six years later, at the age of fourteen, I began to compose and write my own music. I never really knew where my boundless love for music came from – my family isn’t very gifted in music, so I’ve always stepped out of line, somehow. When other girls started going out and being interesting in make-up and fashion, I used to sit at home and write my songs. Melodies and lyrics would just come to me on their own, out of my emotions and thoughts.  Music and writing has always been my greatest expression of feelings. It has a healing effect – not just for me but also for others who listen to (my) music. As soon as I realized that, I knew I wanted to inspire people. Music has kept me pulling through hard times and I want my music to do the same for others.

Are they the same reasons you do it today?
Yes, indeed, but another reason joined in: The reason I want to do music not just for entertainment or healing purposes, but also for a living. It is my greatest wish to be able to create a financial basis by doing what I love to do and bringing joy and comfort to people at the same time. I think this is what every job should do to a certain degree.

How have you evolved as an artist over that time?
I started composing and writing my own music at the age of 14, at the beginning mainly pop songs, which quickly turned into high quality music within the following years, dominated by Celtic and mystical sounds. As a result of my growing passion for symphonic metal, I began incorporating the unique beauty of the genre into my own blend of sounds to finally create my individual style, a mixture of traditional Celtic sounds and modern tones.

Why the decision to start performing Celtic music?
Because I realized this is the style I feel most familiar, most authentic with. People would listen to my music, get to know me in person, and say: “Yes, this totally corresponds your quiddity, your personality, your general appearance.”

How would you describe your sound today?
I would describe it as mystic-melancholic, rocking-romantic and rich in creative and cultural variety.

What makes a good song?
The combination of music, lyrics and a corresponding atmosphere which succeeds in moving people’s hearts.

What do you have on tap for 2015?
I’ll be producing a professional music video for one of my songs (“Moon Song”) with an expert film team from Vienna and I am planning to publish a new single.

Is enough being done to preserve and promote Celtic culture generally?
Generally, I think we’re not doing too bad. Even over here in Austria, people try to keep the Celtic culture alive. There are a few Celtic museums to visit, medieval festivities and there are some Celtic villages where you can even spend a holiday there – living like back then, including washing clothes by hand, cutting firewood, making bread or milking goats and living together in a modest little cottage. But of course, it could be better. It’s difficult already to keep our own Austrian tradition alive concerning our young generation, and even worse to remain aware of the beauty and importance of Celtic traditions.

What can we be doing better?
This, to be honest, is a question I cannot answer.Maybe procuring the history of the Celts, of our ancestors, is something that starts at parenting, at kindergarten, at school. There could be more support for music, for movies, for books approaching the Celtic culture. But how do we get this support? I don’t know. Just never stop trying.