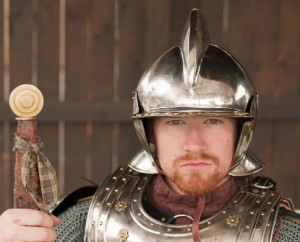 There’s a lot happening in Santa Cruz this weekend; with a Highland Games, Celtic Music Festival, and Scottish-themed Renaissance Faire all wrapped into one big, two-day celebration, the Northern California community of 60,000 will be crawling with Celts of all sorts and styles. Event Coordinator Michael Gardner fills us in on the fun!

What is your own ethnic heritage/background?
On my Mother’s side, we can trace our Scottish heritage back to the 14th century. Mix in some English on her side and the French/Native American from my father’s side and I am a pretty typical American.

How, when and why did you get involved with the event?
I was the Marketing Director for a larger event in Central California and was asked to help a local non-profit start a period event in Santa Cruz in 2005. That group has since fallen by the wayside but I’ve been coordinating the event for the last 8 years later.

What is the event’s core mandate?
Fundraising…..We raise money through this event for the Cultural Council of Santa Cruz County. My staff and I are volunteers.

How has it grown over the years?
We had 325 patrons the first year and have grown by double digit figures every year since. Last year, our attendance increased by 18%…….40% in 2011 when we expanded to a two-day festival.

Who attends the gathering?
Because we incorporate a Celtic Music Festival, Scottish-themed Renaissance Festival, and a traditional Highland Games & Clan Gathering, we appeal to a wide demographic. Some come in period costumes, others in modern kilts, and some just come for the music. With the San Francisco Bay communities so close and more than 8 million people within a 100 mile radius, we draw patrons from San Francisco, the Central Valley communities, the Central Coast, and even Southern California, we have a large pool to draw from.

What can they expect to experience this year?
A completely reworked layout this year and several new stage acts with a couple of stage acts that haven’t been here for a couple of years. as well as all the favorites.

Why is it an important event for the Celtic community there?
Santa Cruz is a community that embraces “cultural” events….especially when there’s as much to do as we offer. (85 artists and crafters selling, seven stages (music, theater, storytelling, magic, juggling, & acrobatics….active all weekend), a full-compliment of Highland Games athletic events, bagpiping competition, highland dance competition, modern clans, sword fighting, a living history area within the Renaissance Festival with several “period” theme characters, including Mary Stuart, Queen of the Scots.

Why is it an important event for the non-Celtic community there?
The demographic of Watsonville is predominately Hispanic American and they support “cultural” events….they make up the core of our customer base.

What are the plans for the event in the years ahead?
Continue to offer a diversity of entertainment, quality crafters and artists, and a weekend of unadulterated fun. We have two great examples of what this event can be by looking at the Highland Games in Woodland every April and the Pleasanton Games every Labor Day weekend….two of the oldest and largest Highland Games events in America.