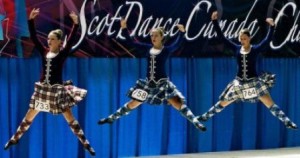 Making new friends, keeping fit and learning to cope under pressure are just a few of the benefits highland dancers get from competing in the ScotDance Canada Championship Series.

Scotdance Canada, formed in 1987, is an affiliate of the Scottish Official Board of Highland Dancing (SOBHD) and has provincial affiliates across the country. One of its mandates is to promote highland dancing through its Championship Series, which will be held this year from July 3-7 in Montreal, Quebec. Already, more than 750 dancers from across Canada, the United States, the United Kingdom, Australia and South Africa have registered for the event, ensuring an excellent turn out.

“It’s actually a series of competitions that cover all the different levels a dancer can progress through to develop their skills,” Deborah Wardrope, the national secretary for ScotDance Canada told Celtic Life International. “We have primary, beginner, novice, intermediate and premier levels. Then the top level, the premiers, are split into two levels. One is called a restricted group and is open for dancers who haven’t won a trophy in the last two years. Each of our provincial affiliates sends a team and they compete in the seven age categories.”

It’s because of the annual Championship Series that dancers are able to make friends from all over the country and beyond. ScotDance Canada has nine provincial affiliates — in Manitoba, British Columbia, Saskatchewan, Alberta, Nova Scotia, Prince Edward Island, New Brunswick, Ontario and Quebec. From British Columbia to Prince Edward Island, Canada’s highland dance community is both widespread and close knit. In fact, the social aspect of ScotDance Canada’s organization makes it very appealing to young dancers and their families.

Wardrope, who’s also a highland dance judge, teacher and author, knows first-hand the results of all this networking. “My best friend and I met through dancing as teenagers,” she said. “Our friendship grew because we started dancing together, then we started travelling with our dancing. She’s now in PEI, and I’m in Ontario, but we still keep in close touch.”

Wardrope said she has a student at her studio who made a dance friend in Manitoba.

“They keep in touch through email and have become life-long friends. I think pretty much anyone on ScotDance Canada’s board of directors can give you a similar scenario. There’s relationships built. If you look on Facebook, you’ll see the dancers’ worldwide network is spread to even New Zealand and Australia.”

Bill Troock, ScotDance Canada President, said the social aspect of the Championship Series and competitions in general is key. “That’s really what binds us as a small community. That’s the networking we do and hopefully that will keep building numbers. That’s what the hope is.”

The health benefits to each dancer are also very important. “By simply watching highland dance you’d appreciate what the health benefits are,” Troock said. “The dancers learn about balance and coordination, balancing on one foot, which is always important for young children, and finding their centre and core strength.”

Troock said highland dancing especially benefits children with asthma because it builds lung capacity and strength. “We’ve had examples of severe asthmatics that have gone on to win Canadian championships so there are huge health benefits, far more than we’ve even tapped. We probably don’t even know what they all are yet. That’s not something ScotDance Canada has looked at, but it may be something we’ll look at in the future.”

Wardrope said being in a competitive field like highland dancing also helps develop other life skills. “The dancers are expected to perform under pressure. If you take what they’re doing out of the equation and look at somebody trying to perform under pressure, on a stage in front of an audience and a judge that is marking them on performance, dancing does that. If you relay that to adults in their business lives, many are paralyzed by the fact that they have to get up in front of their peers and perform. In that regard, asking these dancers to perform to the best of their ability teaches them to cope with pressure in a controlled environment.”