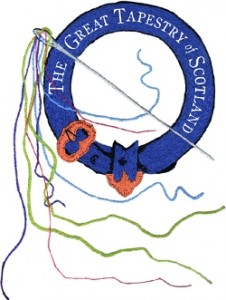 Scots embrace The Great Tapestry of Scotland and begin stitching their country’s story from pre-history to modern times.

Maud Crawford loves to stitch and the Dunblane resident loves to feel part of her community. It’s only natural then, that Maud is one of more than 300 stitchers across Scotland to have volunteered to be part of an ambitious community arts project: The Great Tapestry of Scotland.

Maud is a member of one of many scattered community groups that have just begun to create what will be the world’s longest tapestry.

Scotland’s Great Tapestry will tell stories taken from the country’s 12,000-year history. Over the next 15 months or so, stitchers will create more than 160 story panels, each requiring over 400 hours of sewing. The panels will tell key stories, ranging from the work of 13th century theologian and philosopher John Duns Scot us to the birth of Dolly the sheep, the first mammal ever to be cloned in 1996.

“Stitchers have been clamouring to get involved,” says publicist Anna Renz. “And Scots have been hotly debating which topics are worthy of inclusion.”

Although called a tapestry, the work is being created, like the Bayeux Tapestry, on embroidered cloth. It will be annotated in English, Gaelic, Latin and Scots, with surface stitching in yarns chosen to create a rich and tactile artwork. Stitches will include stem, split and chain, with filling stitches like long and short, satin and darning.

For Maud, the project allows her to increase her stitching expertise, which is currently mainly in crewel work (wool on linen).

“There is always more to be learnt, which I enjoy,” the stitcher told Celtic Life International.

Maud previously worked on the Prestonpans Tapestry, also recently created in Scotland, which depicts the journey made by Bonnie Prince Charlie in 1745 as he sought to regain the Crown.

“I enjoy having to work to (fairly) strict guidelines,” says Maud. “Our stitching group will be the same volunteers who collaborated on the Dunblane panel for the Prestonpans.”

The new tapestry is the brainchild of well-known writer Alexander McCall Smith, creator of the Scotland Street novels and the No. 1 Ladies’ Detective Agency series, who came up with the idea after seeing the Prestonpans.

“This is an important project because it will be a very vivid and accessible account of Scotland’s history,” the writer said.

Scotland is currently debating whether to stay in the United Kingdom or become independent. Scots will hold a referendum on independence in fall, 2014. McCall Smith says this is an important moment.

“In considering her future, Scotland should also be aware of her past. This tapestry is a public celebration of Scotland’s colourful and dramatic history.”

Alistair Moffat, the historical writer charged with deciding which episodes of Scottish history to include in the work, says tapestry seems to fascinate us, pulling on ancient sensibilities.

“To make a tapestry for a nation, something attempted nowhere else, involves a glorious process of ruthless editing,” says Moffat.

“Pitfalls open on every side,” he says. “One of the deepest is the military option, our history as a series of invasions, wars and battles, many of them grey defeats. Another is to show Scotland and the generations of nameless people who made the landscape and built the towns and cities as a soft-focus background for colourful, stately aristocratic processions.”

By all accounts, Moffat has avoided the pitfalls, and stitchers are beginning work from designs created by artist Andrew Crummy, who sees the project as an artistic challenge and an opportunity to create a piece that is engaging and contemporary.

“Our aim is to involve as many people as possible to hopefully create a unique slant on our Scottish history,” he says.

Each stitching group is being allocated a panel – often one that relates specifically to their area – along with a pack containing threads, needles, and a piece of linen, which has the design traced onto it. Groups are given a colour picture of the panel design, which can be used for colour reference, and a suggested list of stitches to use. The rest is up to them.

“There is lots of scope for stitchers to be really creative with their use of colours, textures and patterns,” says Renz. “We give them guidance, but it’s their imaginations which will really bring it to life and give the tapestry its flavour. “

Renz said that so far some sponsorship has been provided by private individuals, as well as thread and yarn company, Coats.  But more money is needed.

“We need help to maintain our momentum and achieve our true potential to create one of Scotland’s greatest contemporary artworks,” she says.

When complete in August next year, the tapestry will go on display; initially in the Scottish parliament, then nationally and internationally.

He says the aim is to tell a story, “Only of this place and, without bombast, pompor ceremony, to ask the heart-swelling rhetorical question; Wha’s like us?” ~ By Carol Scott