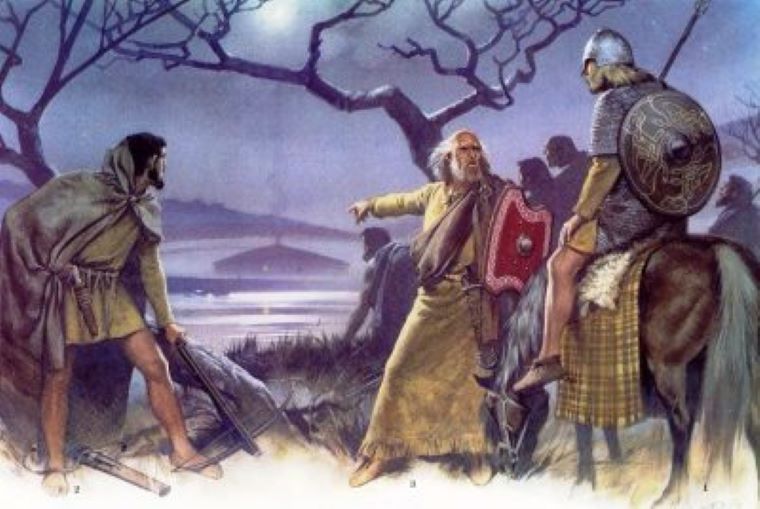 One of the most interesting of the Celtic tribes in the British Isles are the Celtic Picts. They inhabited what is modern day Scotland, north of the Rivers Forth and Clyde.

What is unusual about this mysterious, enigmatic, and unusual Celtic tribe are the tattoos that covered their entire bodies and the war paint they wore in battle to frighten their enemies.

They were a dominate force in what is now Scotland for at least 600 years and their neighbors were the Gaels, Britons, Angles and Vikings.

They were called Picts by the Romans because they were “painted people” and even today we don’t know what they called themselves.

During the late Iron Age and early Medieval periods, the Picts were a tribal confederation of Celtic peoples living in ancient eastern and northern Scotland. They were a mysterious ‘painted people’ that just suddenly disappeared from Scotland and history during the Dark Ages. 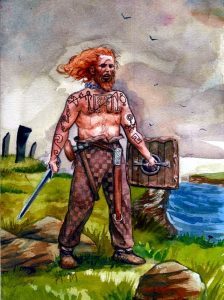 They were fierce Celtic warriors that stopped the invasions of the Romans and the Angles in their lands north of the Rivers Forth and Clyde. Because they left no written records or histories behind, all we know of their inhabiting what is modern day Scotland from the Pictish stones throughout Scotland and the Brythonic place name elements in Scotland.

The first that the Picts appear in writing are from the chronicles of the Romans who had invaded Briton in 43 AD and stayed until the tenth century. It is believed the Picts over several decades had merged with the Gaels.

They spoke the now extinct Pictish language that was thought to be related to the Brythonic languages spoken by the Britons who lived south of them in England.

The Picts are believed to be descendants of the Celtic Caledonii tribe and other Celtic tribes mentioned by the Roman historians or on the world map of Ptolemy.

Pictland – also called Pictavia – gradually merged with the Gaelic kingdom of Dal Riata to form the Kingdom of Alba, which eventually came to be called Scotland.

Alba expanded absorbing the Brythonic kingdom of Strathclyde and Berciacian Lothian and by the 11th century historians believed the Pictish people and their identity had been subsumed into the “Scots” conglomeration of people.

The Pictish society was typical of those Celtic tribes during the Iron Age in Northern Europe. They traded with neighboring Celtic tribes. Very little of Pictish writing has survived so what we know today of their culture comes from archaeological diggings and finds.

We know about Pictish history from Bede’s Historia ecclesiastica gentic Anglorumwritten approximately in the late 6th century and also from various Irish annals.

We don’t actually know what the Picts called themselves because Pict is what the Romans called this Celtic people. The Latin word Picti appears first in a panegyric written by Eumenius around 297 AD. The word means “painted or tattooed people.

Picti seems to be a generic term for people living north of the Forth-Clyde isthmus.

Old English called these people Pechts and the Welsh called them Fichti in ancient writings from Ireland. The name Cruthin, Cruthini, Cruthni, Cruithni, or Cruithini(the modern Irish Cruithne) was given to the Picts and to another group of people who lived alongside the Ulaid in eastern Ulster. 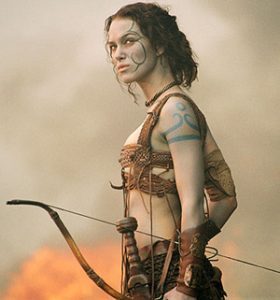 Historians believe that a Pictish federation of Celtic tribes was formed partly as a response to the growth and northern movement of the Roman Empire. How and why this happened is not known today. Speculation is that they banded together to stop the Roman Empire from seeking their lands north of Hadrian’s Wall.

We have only heard these names from second or third hand from speakers of the Brythonic or Gaelish language as Pictish written recorded history did not begin until the Dark Ages.

When the Angles of Bernicia over ran British kingdoms, one of which was the Anglian kingdom of Deira, they later became the most powerful kingdom in Britain. Deira and Bernicia together were called Northumbria.

It is believed the Picts were probably a tributary to Northumbria until the reign of Brideimac Beli in 685 AD. The Anglicans suffered a severe defeat at the Battle of Dun Nectain that stopped the Angles northward expansion. The Picts sent the Angles back south to Britain.

By the mid 9th century Vikings had destroyed the kingdoms of Dal Riata and Northumbria and greatly diminished the power of the Kingdoms of Strathclyde and founded the Kingdom of York. During a major battle of 839 AD, the Vikings killed King of Fortriu, Eogan man Oengusa.

In 840’s AD Cinaed mac Alpin (Kenneth MacAlpin) became king of the Pict. He united the Picts and the Scots and together these tribes formed the new Kingdom of Scotland. At this time they routed out the Vikings.

During the Dark Ages, the Pictish language did not suddenly disappear but through a process of Gaelicization (which may have begun generations earlier) was clearly underway during the reign of Kenneth MacAlpin.

By the 11th century, the inhabitants of Alba had become fully Gaelicized Scots and the Pict identity was forgotten. Later in British Isles history, the idea of Picts as a Celtic tribe was revived in myth and legend.