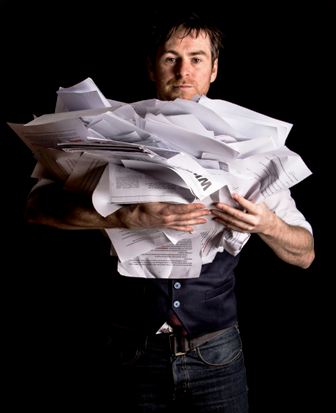 Irish author Seán de Gallai was always keen on writing. Steps From The Dark is his first novel. Get to know him here!

What are your own roots?
I’m 34 years old, born in the Gaeltacht region of Gweedore, County Donegal, in North West Ireland to Irish parents who met in New York.

What inspired you to become a writer?
As a boy I read a lot. I loved getting lost in another world and was fascinated by the way writers could make this happen. I loved writing little stories at school and in my mid twenties whilst living in Paris I had what I thought was a great idea for a story. It proved harder than I imagined to develop so when I returned to Ireland I began taking scriptwriting classes and later novel writing classes. If I have an idea that I think is really good I feel compelled to share it. Ultimately I love making people laugh, although Steps From The Dark as the title suggests comes from a much darker place.

Are they the same reasons you do it today?
Yes. I want people to be entertained. Plus writing is something I can do that doesn’t feel like a job. It can get very frustrating at times but it’s what I enjoy doing.

What are the challenges of the profession?
There are so many. It’s near impossible to find an agent or a publishing deal and while easier now to publish independently through Amazon, it has brought forth other kinds of problems. There are so many writers and so many books. How do you make your book stand out from the crowd? An independent book might be a great read but become totally lost amongst the other titles. Traditionally published books get marketed a lot with tonnes of money spent getting an author out there. Independent authors have to find a way of doing this without the money. Also people don’t read as many books as before with all the other online distractions. Attention spans aren’t what they used to – people demand instant gratification. The stories need to be really great and that’s not an easy job. And just because the story I’m working on seems good to me does not mean anyone else will like it or buy it. We spend a year plus developing a story which may end up not appealing to the general public. That’s quite a risky investment of our time. The other challenges: It doesn’t pay at all, except to those few like J.K Rowling and Suzanne Collins. It can be a lonely job.

What are the rewards?
There is much to be satisfied about when you have the finished book in your hand. It really does feel great. When a stranger tells you they read your book and really enjoyed it… that’s what it’s all about.

How have you grown as a writer over time?
I’m still relatively young as a writer. I’m 34 and this is the first book I’ve published. I was very excited about a novel I was working on a few years ago but unfortunately it didn’t quite make the cut. I was gutted to have to put it back on the shelf having spent so long developing it. But I definitely learned a lot from the process. I learned that there are different ways to go about creating the book. In this novel I tried a completely different approach. I didn’t plan how the book would go. I had the main character Alex in my head and I sat down at my laptop and wrote. Her voice showed me the way. Things happened in this book that I had not anticipated which is really weird. I think writers never stop growing or changing.

Is your creative process more ‘inspirational’ or ‘perspirational’?
I wish it was more perspirational. I’m really only good at getting work done once an idea has struck me. The two books I’ve developed to date – the ideas for them just seemed to drop out of the sky.

What makes a good book?
A good book for me needs to have interesting, believable characters and a strong plot. Dialogue is also important to me. Sometimes I read good books that are let down by unbelievable or stale dialogue.

What motivated you to write The Dancer?
A couple of things really. Irish Dancing is huge within my family. I was very fortunate to get to see the show biz side of the world from an early age – I didn’t dance but was brought from feis to feis with my sisters. My brother Brendan was lead dancer with Riverdance. He went on to develop his own show ‘Noctu’ which toured in Ireland and had a 6 week residency in New York in 2011. I helped out on both those tours and I could see the progression from tiny six year old dancer competing against hundreds to the final phase of performing to hundreds in a theatre. As a teacher I also noticed that there were various ballet novels for children but hardly any with Irish dancing. I felt there was room for one and had for a long time been waiting for an idea for a dance novel to come to me.

What did you learn during the process?
I learned that you need to have a lot of patience – something which I’m still trying to deal with! I wrote the first draft of The Dancer in 4 weeks. But so many other things have to happen before it’s in a position to move forward and oftentimes these things are out of my control. At least I’ll know what to expect with my next book.

How did you feel when the book was completed?
Relieved to be honest. When I finished the first draft I was buzzing. But when it came to the very finalized proof-read copy I was just happy to close the file on my laptop and release it to the world. Just around the time of the launch my mother got really sick and had to get open-heart surgery. I remember just feeling empty as the first hard copy arrived through the letter box thinking it didn’t really mean anything in the grand scheme of things.

What has the response been like so far from those that have read it?
Positive. Readers have said it’s been a great read, gripping and moving. Readers were surprised as how funny it was too.

What’s next on your creative agenda?
Next up is a sequel to The Dancer. There’s a lot left to go wrong (and right) in Alex’s life.