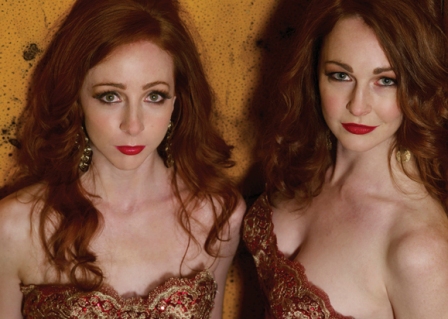 Irish sisters Joyce and Ruth O’Leary are testament that the family that plays together, stays together. With each doing double-duty on violins and vocals, the dynamic duo has dazzled audiences around the world with their Celtic-inspired ‘Classical Crossover’ sound. Recently we spoke with the girls about their roots, their recordings and their connection to J.R. Ewing!?

What is your own heritage?
We were born and raised in Ireland. We are from a town called Carrickmacross, Co.Monaghan – an hour north of Dublin and an hour and a half south of Belfast.

It all began when Ruth’s playschool teacher started teaching violin and Ruth was her first pupil. It wasn’t too long after that I copied my older sister and started playing violin at the age of 2 and a half!

How long has the band been around?
Sephira began in 2005. We recorded our first album ‘Believe’ in 2005 and released it in Ireland in 2006. The Sephira brand has changed completely since then.

How has the group evolved since that time?
Our music has definitely evolved since ‘Believe’. In this album, a vulnerability and youthfulness can be heard – ‘Believe’ had an ethereal sound.  Sephira now shows a very strong, fiery and theatrical side in our latest EP, ‘Eternity’ which is dedicated to our good friend, the late Larry Hagman. Another huge change has been our work with the wonderful Irish designer, Jacqueline Quinn, who designs our on-stage couture gowns. This has definitely helped take Sephira in a new direction.  Not only has our music and image developed in very many ways but we have evolved as people. This challenging choice of career has very much established us as independent women with strong entrepreneurial skills. Our chosen career tests our tenacity every single day but it is a lot of fun to work together as siblings.

How would you describe your sound today?
We don’t completely describe our music as Celtic. There is a slight Celtic essence because of our heritage, but Sephira comes under the genre of Classical Crossover – the same genre as Sarah Brightman, Vanessa Mae, David Garrett & Josh Groban.  Sephira’s sound is a mix of fire and water. The vocals show our ethereal and more angelic side. Our violin playing displays quite the opposite – the blazing fire within! We love that we can take our audiences on a wild rollercoaster ride during our performances.

Where do you typically perform?
A lot of our performances over the last few years have been high-end corporate events worldwide taking us all across Europe and the United States.  Luminaries we have performed for have included Donald Trump, Prince Albert of Monaco, Priscilla Presley & Larry Hagman. Sephira also performed at the pre-premiere of the Bond movie, “Skyfall” in NYC and at the 50th anniversary of Bond in Toronto. Between corporate events, we perform in beautiful theaters across the US.

What is the response like from audiences?
Our audiences have the same thing to say every time they experience Sephira live. They comment on the vocal harmonies, the unique on-stage sibling connection and the passion that goes into every single performance. During our string-driven pieces, the audiences are on the edge of their seats with the excitement and passion created by the mirrored choreography.

What were the challenges?
The challenges we set for ourselves when recording a new song or album are to keep reaching new heights with every record we release. We like to see Sephira forever evolving. We were so happy with our holiday album ‘Starlight’, released in 2011, that when we set out to record Eternity, we put ourselves under huge pressure to develop our music further.

What were the rewards?
We definitely feel we surpassed our goal of reaching new heights. Not only do we brand ourselves as vocalists and violinists, we are also record producers, not to mention our aerial training which is being integrated into our new show. Eternity allowed us to delve into the depths of our dreams, hence the theatrical feel to the opening track “Danse Macabre” – one of our faves!

Why the Larry Hagman dedication?
We dedicated Eternity to Larry Hagman because not only was he Sephira’s biggest fan, he was such a good friend to us. When we first took the US market on, he was always there for us. He called us every week to check on us to see how things were going. At the age of 80 he drove for 6 hours to see Sephira perform. We are so grateful to have had Larry in our lives and we will forever hold a special place in our hearts for him.  He is most definitely looking down on us from the stars.

Is enough being done to preserve and promote Celtic culture?
Definitely! In the US, people love the Celtic culture. In every city there seems to be some sort of Celtic show taking place! We are so proud of our heritage. For such a small country, Ireland is very much loved across the globe!