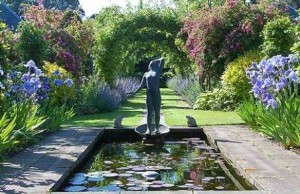 Shepherd House Garden is just one acre in size, but is much admired and has been named one of Scotland’s best small gardens. Situated in Inveresk in the eastern part of the country, this walled treasure offers classical herbaceous gardens and a profusion of snowdrops; all arranged by the owner, respected botanical artist Lady Ann Fraser.

The garden has evolved under the care of Ann and her husband Charles, ever since they bought 17th century Shepherd House in 1957.

“For our garden, we have borrowed ideas from around the world,” Ann told Celtic Life Intl. “I think our visitors find the garden special because it is small and they can relate to it and maybe find ideas that they can repeat in their own gardens.”

The garden bursts with colourful Tulips, Irises, Poppies, Snowdrops and Hellebores that all serve to inspire the artist-owner.

Like many in Scotland, the Frasers collect and cultivate snowdrops. They currently grow more than 50 named varieties and take part in Scotland’s annual Snowdrop Festival.

“I have a growing collection of specialist snowdrops, having recently become very interested in growing and painting snowdrop hybrids and cultivars,” Ann said.

Snowdrops are all unique: “Some flower as early as October and some as late as April, some have bigger flowers, some have more green markings, some broader leaves, some grow tall and some are short. Believe it or not, there are over 600 different types. Collecting them is expensive and addictive.”

Ann began her artistic career by studying drawing and painting at Edinburgh College of Art, following up with a course in botanical illustration at the Royal Edinburgh Botanic Garden. She had her first solo exhibition in London in 1991 and since then has exhibited widely in London and Edinburgh.  She has been awarded a silver, a silver gilt and a gold medal for her paintings by the Royal Horticultural Society in London.

Nowadays, her paintings can be found in many private collections in the U.K. and U.S.A. Her piece, The Black Border, is featured in the book Contemporary Botanical Artists of the World by Dr. Shirley Sherwood, a trustee of the Royal Botanic Gardens in Kew, London. The Black Border has been exhibited around the world, most recently at the Smithsonian Museum in Washington.

Ann says that each of her snowdrops has its own story of where and by whom it was found. But snowdrops fail to thrive in perennial borders, so the artist has planted hers in less formal areas at the back of the garden where, who knows, their delicate beauty may inspire others to take up a paintbrush.