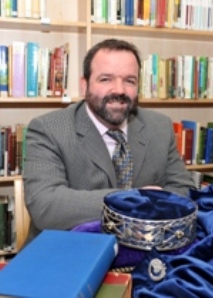 This weekend’s festivities at the Antigonish Highland Games will feature Ships of 1801, an original dramatic concert performed by local and recognized musicians in period costume. Song, dance, and Gaelic verse are tied together by live narration, commemorating the culture that early Scottish settlers brought with them to Nova Scotia. A member of this year’s cast – and the province’s Minister of Gaelic Affairs – Lewis MacKinnon, gives us his perspective on the dynamic production.

What is your own ethnicity/heritage?
My heritage is Gaelic and Acadian.  In the late 1700s/early 1800s, my father’s people came from the west Highlands and inner western islands of Scotland to eastern Nova Scotia, settling eventually in Inverness County, Cape Breton. These people were Gaelic in language, custom and ethos.  It is from my granduncle and father that I first learned Gaelic.  My granduncle passed away in 1990.  Impacting my life significantly, his story of living with a language and culture that was actively marginalized, discouraged and ridiculed during his lifetime spurred me to work on behalf of Gaelic language and cultural development in our province.  It is a rewarding journey of self-discovery, learning and sharing.  I now work in Gaelic on a daily basis and only speak Gaelic with my father and two boys and to pretty much all of the friends they play with!  My mother’s people came from France to Acadie in the 1660s.  My Acadian side is rich in language, stories and family gatherings.

Why, how and when did you get involved with this production?
Duncan MacDonald, a former mentor and long-time friend approached me with the concept of telling the stories of the people who came over from the west Highlands on the ships that arrived in Pictou Harbour in 1801.  He asked if I would compose a song and/or poem to be included in the production.  I explained that I hoped my involvement would help communicate through the production that these settlers from the Highlands and Islands of the Scotland were Gaels: a people who were Gaelic speaking and who had a Gaelic cultural expression and ethos.  I was involved in the first production in 2012 and am involved in the 2013 one as well.

What are the challenges of putting it on?
The challenges of putting on a production of this kind is to reflect who these people were and how they would have communicated their identity, emotions and cultural expression.  The narration and most of the songs are done in English because today English is the first language of the descendants’ of the Gaels.  It is important to understand that the overwhelming majority of the passengers on these ships would have only spoken and understood Gaelic.  Their interaction, music, dance and outlook on the situation at hand and response to it would have been in Gaelic and from a Gaelic perspective.

What are the rewards?
The rewards are working with a great group of talented musicians and performers and directors and producers, an opportunity to build greater awareness as to the Gaelic identity of the early settlers from the Highlands and Islands of Scotland amongst cast and audience.

Why is it an important event for the community?
This is an important event for the community because in 1901, 40-60% of Antigonish County was Gaelic speaking.  Across the province Nova Scotians who claimed Gaelic as their mother tongue numbered 50,000.  Up until the Second World War, Antigonish County was strongly Gaelic speaking.  Gaelic was the vehicle through which the identity of the local people was conveyed.  This identity included surnames, nicknames, songs, music, dance, stories, tales, humour, hospitality, spirituality, foods, placenames and as more people came to speaking English, Gaelic-influenced expressions in English.  Today, where efforts are being made to revitalize Gaelic language and culture in Nova Scotia, it is valuable and helpful to better understand and appreciate the extent of Gaelic presence and influence in the local area.

What is the response from audiences like?
The response from the audiences has been extremely positive.  There seems to be a strong interest because this production attempts to interpret the story of the local people themselves.  It is the stories of the hardship, disenfranchisement, loss and ultimately survival and persistence of the ancestors of local residents in the counties of Pictou, Antigonish and Inverness in particular that are being told.

Ships of 1801 at the main stage of the 150thAntigonish Highland Games on Saturday, July 13th at the Keating Centre on the St. FX Campus. A second performance brings the show to Pictou’s Decoste Centre on Saturday July 20th.