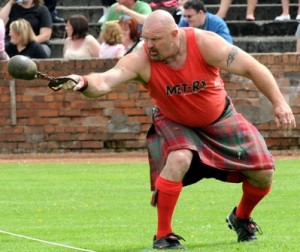 Nestled halfway between Glasgow and Edinburgh along the M8, the sleepy setting of Shotts (population 8,235) will be overrun with Celts this Saturday for the town’s annual Highland Games celebrations. Recently Celtic Life International spoke with the event’s secretary Helen Russell about this weekend’s event.

What is your own ethnic heritage/background?
I am Scottish, born in Shotts.

How, when and why did you get involved with the event?
I have attended the Games since they began, taken by my parents to this community event. I joined the committee to help out with administration work 15 years ago and have been Secretary ever since.

What is the event’s core mandate?
We wish to continue the tradition of Scottish Highland Games, allowing pipe bands, dancers and sports people to have competitive events.

How has it grown over the years?
It is more a case of consolidating what is in place over the years as it is difficult to find helpers and funding. We are able to continue this annual event with the support of North Lanarkshire Council who give financial and practical assistance, and by sponsorship from local businesses.

Who attends the gathering?
Followers of pipe bands which accounts for a large number, supporters of the highland dancers (there are over 100 dancers taking part), people interested in the traditional Heavy Events which includes tossing the caber, visitors from other countries (there is a tradition of recognising them with a certificate signed by the Chieftain) and the community turn out in large numbers.

What can they expect to experience this year?
The day begins with the spectacle of the Chieftain’s Parade through the town to Hannah Park where Chieftain Tom Hyslop will perform the official opening. The Highland Dancing competition involves over 100 dancers performing the four main dances of The Highland Fling, Strathspey Reel, Sword Dance and Shean Trubhis. Some 40 performances by pipe bands in the West of Scotland and Open Competitions for the various grades. The school sports programme which includes events which reflect traditional Highland Games – 400 metres race,  traditional shot putt, wellie throwing underarm ,haggis pass, shuttle relay from sitting position six people per team, and tug of war with teams consisting of four girls, four boys and one adult. The traditional heavy events of tossing the caber, throwing 16lb Scots hammer, putting the 16lb shot, throwing 28lb weight, and throwing the 56lb weight for height. The finale involves the march past of all the bands with the Chieftain taking the salute. The mass bands play together to salute the Chieftain.

Why is it an important event for the Celtic community there?
Shotts is not a Celtic community as such but the people are proud of their Scottish inheritance and support the Games every year and show great warmth to visitors from abroad and from England.

Why is it an important event for the non-Celtic community there?
It is a day of tradition and Scottish heritage and Shotts is a close  community and the residents support community events.

What are the plans for the event in the years ahead?
The Games will be held on the first Saturday in June every year as long as we can continue to find people to help with the organising and stewarding on the day.