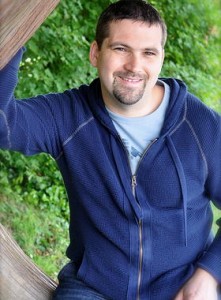 Edinburgh-born writer and radio show/podcast host Andrew McDiarmid is both proud and passionate about his heritage. Here, he shares his thoughts on his personal and professional life and the importance of keeping Celtic culture alive.

What are your own roots?
I was born in Edinburgh, Scotland. My father’s lineage stretches back to Ireland, and my mother’s to Wales. In a sense, this makes me wholly Celtic, which gives me a sense of pride, although I’m sure it’s not as simple as I imagine. I remember my mother saying something about a relative from England. When it comes to people and ethnic heritage, it usually isn’t simple. And we shouldn’t expect it to be. When we don’t have the full picture of our ethnic background, we are tempted to make things up or dwell on certain parts and leave others out. Embracing our family heritage – even the messy, uninteresting, or undesirable parts – takes time and effort.

When and why did you become interested in Celtic culture & music?
When my parents decided to immigrate to the United States in 1990, I unwittingly became an ambassador for Scotland. Although I wholeheartedly lived the American life – the food, the pastimes, the entertainment, and the vacations – I couldn’t let go of Scotland. I had Scottish and Celtic blood running through me. There was no getting away from it. In 1995, a movie called Braveheart solidified my patriotism and set me ablaze with passion for all things Scottish. I embraced the role of ambassador. In 1997, we returned to Scotland for our first visit. I had a summer romance with a Scottish girl. I started taking an interest in Scottish politics. I worked with The Scotsman newspaper to create the Internet’s first Scottish-source news feeds, and my website was the first on the web to implement them. I even started a Scottish Citizenship Register so people could join me in boldly declaring their Scottish nationality. Then Tony Blair happened, devolution, the return of Scotland’s parliament, and SNP victories, and I was caught up in all of it, from afar. With no one to interact with directly about it all, I built up an inward, virtual universe with Scotland at the center, while outwardly, I was living the life of an American teenager and twenty-something. Then along came the chance to share Scotland with others on the radio.

When did the radio show start?
I started doing a program called Simply Scottish in the autumn of 1999. Legend has it I was doing some community service at the local radio station in lieu of paying off a traffic ticket. The program director had a spot open on Wednesday evening, and my dad and I offered to do a weekly Scottish radio show. Soon, it was sponsored by the local newspaper and became quite a popular offering. Scheduled right after NPR’s flagship news program All Things Considered, we produced the hour-long show live every week for three years. Listeners from all walks of life – professors, drivers, cleaning ladies, librarians – enjoyed the mix of Scottish traditional and contemporary music, the amusing and lively stories of my father, and the informative features on Scottish culture and history. By 2000, we launched a campaign to get the show into other areas, and soon, it could be heard in south Texas, northern Mexico, Tennessee, West Virginia, South Carolina, Ontario Canada, and online. In the summer of 2001, my family decided to move to Seattle, Washington, and we put the show on hiatus. A decade, a daughter, and a college degree later, I started the show up again, this time as a podcast. For over a year, I’ve been building a new audience for the show, and people are really enjoying it. It can be heard on iTunes, the Celtic Radio Network (a network of online stations playing Celtic music 24/7), a radio station in Massachusetts, and at www.simplyscottish.com.

What is the program’s mandate?
The mission of Simply Scottish is to build an educated, passionate community of Scotland lovers around the world that is dedicated to promoting Scotland’s interests and living out the Scottish qualities of friendship, perseverance, and industry.

What are the challenges of putting the production together?
Right now, I record each episode out of my home studio, with the mild difficulties of avoiding overhead plane noise and the occasional songbird. At the moment, I pay for the costs of production and promotion myself, about $100 a month. I’m considering a Kickstarter campaign so listeners can help fund the program. The time commitment can be challenging too. It takes me 10-15 hours to research, write, select music for, record, edit, upload, and promote each episode. Oh, and the obvious challenge of not being physically in Scotland, so I use the Internet to bring everything closer.

What are the rewards?
Every time I start to doubt why I do the show, I get a message from a listener who enjoys the program. They tell me that they like the music or that they learn a lot from the topics I present. This is enough to keep me going! I’m also enjoying the interaction with listeners on our Facebook and Twitter communities.

Who are your listeners?
North Americans of Scottish decent or who have a strong affinity or appreciation for all things Celtic make up the majority of my listenership. A smaller percentage of listeners are Scots living in Scotland or in other countries. I’ve got listeners from several states in America and a number of places in Canada. I’ve also got people listening in from European countries like Germany and Spain, as well as Australia. The great thing about a podcast is that it’s not limited by the reach of terrestrial stations. I’m building a global audience for the show, and the international flavor adds richness to our listener community.

Aside from radio, how are you involved with the Celtic community there?
I’m vice president of the Caledonian & St. Andrew’s Society of Seattle, so this gives me another way to foster awareness and support for Scottish and Celtic culture. I’ve also presented on Scottish topics at local highland games events and Burns suppers.

Are we doing enough to promote and preserve Celtic culture generally?
For such small countries, we’ve certainly done quite well for ourselves so far! I see a lot of interest in Celtic culture. People are drawn to the music, the history, and the people. I think Ireland has done a great job promoting its Celtic culture in North America. St. Patrick’s Day events are as popular as ever, but not as many have heard of St. Andrew’s Day or Tartan Day. I think we could be doing more to promote Scotland here and around the world. Movies like Disney/Pixar’s Brave come along and help jumpstart conversations and pique people’s curiosity. But more could be done. The influence that Scots and other Celtic peoples have had on the development of the United States and Canada is tremendous. We need to look for new ways to remind a new generation of people about this legacy.

What’s next on your agenda?
I’ve started work on a book about my immigrant experience in America. It’s tentatively called What I Get For Being an Immigrant! It’ll be a funny and touching look at the challenges and rewards of the immigrant life. My primary audience for the book will be fellow immigrants, those who have uprooted themselves from their homeland in search of a different life. But I hope it will also strike a chord with people who are not immigrants, those who have left something familiar for something unfamiliar, be it job, house, city, school, toy, habit, lover, or friend. In that sense, we are all immigrants, moving through life’s uncharted territory and doing our best to survive and thrive.