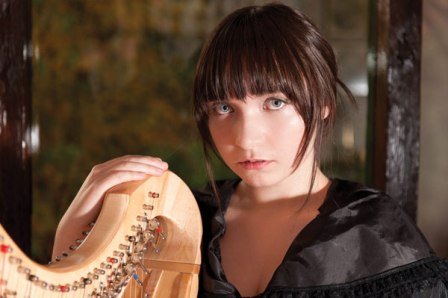 Singer and harpist Siobhan Owen may have lived in Australia since the age of two, but there is no denying her Celtic heritage.

In fact, with a Welsh father, and an Irish mother from County Galway, Owen is as Celtic as it comes.

The twenty-something musician was born in the town of – better take a long breath for this one -Llanfairpwllgwyngyllgogerychwyrndrobwllllantysiliogogogoch – on the Isle of Anglesey in Wales.

It is understandable, then, that one of her career highlights was singing the Welsh national anthem to a packed stadium at the Australia vs. Wales rugby test match in Sydney in 2012. The performance was broadcast worldwide – not bad for someone who once suffered from severe performance anxiety.

“I still do to a small extent,” she admits, “but it’s getting easier.”

Performing the anthem wasn’t Owen’s only feat; the Celtic-classical crossover artist has been earning accolades far and wide for her work, which includes four independent recordings.

And, earlier this year, she flew to Siberia where she performed as the voice of Yseult in the Russian version of Tristan & Yseult, a role she first took on in 2014. The producer of the Franco- Celtic rock ballet, Alan Simon, discovered her on YouTube.

As well, Owen recently performed a series of concerts in Wales and England as part of her Celtic Roots Tour, and will likely add shows in Ireland and Scotland as well.

She began studying classical singing at age nine, before one of her teachers introduced her to Irish music a short time later.

“It seemed to suit my voice, so I decided to learn more Celtic songs,” she shares.

She sang at her first Celtic festival when she was 14, and soon after was asked to perform at the Adelaide Fringe festival with French singer-harpist Cecile Corbel.

“She accompanied me on her harp, and I loved it so much, it inspired me to learn harp to accompany myself.”

Owen completed her Bachelor of Music in Classical Voice, Performance and Pedagogy at Adelaide University in Australia late last year.

“The time I spent at university has given me the discipline to practise and learn new music for my repertoire,” she asserts. “The classical training has also helped me develop my Celtic style of singing in a way that won’t damage my voice, and will help to sustain it for a long time.”

When it comes to composition, Owen says she has an idea of how she wants a song to sound, noting that sometimes it works and other times it doesn’t.

As for Celtic culture, Owen believes that, thanks to popular music and movies, it is enjoying a new-found popularity. And while Welsh is quite widely spoken in Wales and compulsory in Welsh schools, she suggests that more could be done to revive some of the endangered Celtic languages, such as Cornish and Manx.

“I would love to learn more about all the Celtic nations. Celtic festivals can certainly help to educate people more about the history and heritage.”

“I love it when I can see my performance has been appreciated and has moved people,” she declares. “My mum always says if one person in the audience cries, then I’ve done my job. “