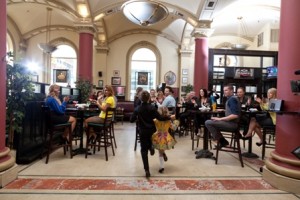 The Irish Embassy Pub & Grill on Toronto’s Yonge Street brings the old country to the Canadian city’s financial district and to the hearts of expatriates and visitors.

The last two years have seen an influx of young Irish expatriates into Toronto, Canada’s largest city, and they have added a fresh energy to the already strong Celtic community, says Gavin Quinn, co-owner of the Irish Embassy Pub & Grill, a venue beloved of many new arrivals.

Opened in 2000 on St. Patrick’s Day, the Yonge Street establishment is situated in a lovely, old bank building with vaulted ceilings and beautiful marble floors.

“It’s like a grand old Dublin or London city pub as it has great architecture and design circa 1873 and is very unique here in Toronto,” says Quinn. “We expanded into the next building about four years ago and had a classic Dublin Victorian bar and furnishings imported fromDublin.”

Here, guests enjoy authentic Irish dishes, sip Irish beers and partake of one of the largest selections of Irish whiskeys in the city. Music is important. The venue features many Irish artists and holds traditional and Celtic music nights on Fridays and Saturdays. Quinn also hosts traditional performers from the city’s Irish dance schools, as well as screening Gaelic sports and soccer and rugby games.

Situated in downtown Toronto, the venue attracts a wide range of clients.

“On any day you can see local financial district types, Irish expats, tourists and guests from all over the city having dinner before a concert, a hockey game or a show (the Air Canada Centre is just a three-minute walk away).

“There are also some vibrant neighborhood communities around us and we enjoy a good following from local residents, who are increasing in number as the condo boom has helped create residential density.”

The Greater Toronto area has roughly 60,000 Irish expats, and another 400,000 residents who claim some Irish heritage. The city has many Irish organizations that promote Celtic culture and offer support to the community.

Quinn’s establishment and its sister Toronto pubs, P.J. O’Brien’s and Quinn’s Steakhouse and Irish Bar, are popular social hubs for those involved in the Irish Chamber, Celtic Studies, the Ireland Fund of Canada, the Ireland Park Foundation and the St. Patrick’s Parade Society, so there is always a genuine community atmosphere. P.J. O’Brien’s hosts regular Celtic music sessions on Friday and Saturday evenings.

“New arrivals are enjoying linking up with Celtic cultural associations,” Quinn says. “The established Irish community has been good at helping to set up meet-and-greet events with the newly formed Irish-Canadian Immigration Centre.”

Himself born inIreland, Quinn moved to Toronto from Dublin with his parents and six siblings in 1986.

“The Canadian economy was doing much better than Ireland’s at the time and my father Pat had some business opportunities here. My father was originally from Leitrim and my mother Anne from Cavan but they lived in Dublin for many years where they were in the retail and hospitality industry, so we all grew up learning business,” he explains.

“We remain a family business, and my brothers Ben, Pat, Paul, our mother and myself operate our various pubs and restaurants, which also include a restaurant in Montreal.

“Our father, who passed two years ago, was well known for promoting well- known Irish musical artists here in Toronto, such as Paddy Reilly, Phil Coulter, Daniel O’Donnell, The Dubliners and local harpist Eithne Heffernan. We are very lucky to have a wonderful team of staff, many of whom are Irish expats who also like to perform,” he adds.

“It’s important for us to celebrate Celtic culture. Any day of the week you can find the pubs lively with plenty of good characters, Irish and all sorts, enjoying their favorite Irish beverage, which is not always tea.”