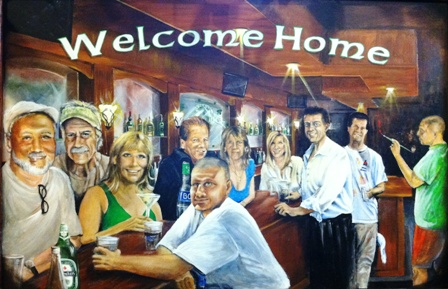 Wales is awash in a sea of Gastro-Pubs these days, and none might be finer than The Plough and Harrow in the quaint village of Murton, near Swansea. The reviews on the refurbished restaurant have been stellar so far, with many noting the eatery’s preference for local produce. Sure enough, the Ffrywth yr mor (Blanched Cockles, Whitebait, Mussels and Prawns, Laverbread Mayonnaise, Leek and Red Onion Salad) is as fresh as it gets, as is the Cawl y dydd (soup of the day). The real-deal meals here, however, are the Smoked Gressingham Duck Breast, the Trio of Salt Marsh Lamb (Two Bone Rack, Kidney and Hotpot), the Hereford, 36 day dry aged Rib Eye Steak, and the 12 Hour, Overnight Roasted Belly of Gloucester Free Range Pork. Leave some room for the sweets, as the Date & Apple Lattice, Sticky Toffee Pudding Ice Cream, Maple Syrup and Smoked Bacon Popcorn is to absolutely die for. And don’t depart without sampling something special from the extraordinary wine list, or, if you prefer, one of the many excellent local and imported beers, lagers, ciders and stouts. The décor and surroundings are spectacular, as is the service which is both personable and professional.

The salty seaside town of Douglas bustles each spring with the Isle of Man TT Races, but remains popular through the summer months with visitors from across the UK who come for its pristine beaches and busy nightlife. More evenings than not, Jaks is the hub of activity, and with good reason; with three menus to choose from, and a bar stocked with fine wines, spirits and beers, there is something to everyone’s taste. That said, the 24-year-old establishment stakes it reputation on, er, what else? Steaks. Both the T-Bone and Fillet are beyond scrumptious, and the lesser-priced Rump, Ribeye and Sirloin are excellent options also. The Ribs, Lamb and Pork Loin can be mixed and matched seasonally, as can the fresh seafood, caught daily. Both the Taps and Bar menus offer up a selection of smaller choices, including meat, cheese and fish-based appetizers, ideal to whet one’s whistle. While you’re at it, be sure to savour one of Jaks’ famous cocktails – many of whose names can’t be published here. A sprawl of big-screen TVs, along with nightly live entertainment, means you never have to go home. If you do disappear, you can walk off your soiree by the sea.

A little like the Durty Nellys franchise, O’Connell’s is part and parceled out across the globe. Thankfully, that’s not the case here with this independently owned and operated tavern. Situated directly across from Brittany’s historic parliament buildings, it’s a miracle that the region runs smoothly, let alone at all. The area’s Celtic past comes to life daily at this virtual shrine to the Emerald Isle – you won’t find anything fancy or French on the menu, only wholesome, old-fashioned pub grub – including club sandwiches, ham, potatoes, lamb, chicken and a sampling of salads that pay homage to Irish namesakes. You will, however, enjoy the area’s heartiest (and only) Irish breakfast – replete with authentic black pudding – served all day long. While the venue is open daily at 11am, things don’t get really get going until happy hour, which starts at 7pm. The Guinness and Harp flow freely after that, as does the conversation – something both the French and Irish excel at, especially after a few pints. Be watchful of the dartboard, however, as things can, literally, get a little out of hand. And while taps may shut at 1am, the party spills out onto the street until the wee hours.