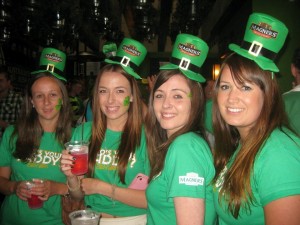 Sydney’s Cock ‘N’ Bull is home to the traveling Irish

Running an Irish pub in the hood that’s home to the largest concentration of Irish in Australia must be easy, right? Just import Guinness and Magners and play some fiddle music and everyone will be happy.

Not quite. Sydney’s Bondi Junction is so Irish it’s known as the 33rd county of Ireland and, when your clientele is that authentic, you’d better be authentic too. Luckily, that’s no problem for the Cock ‘N’ Bull.

“We are not a dime-a-dozen plastic pretend Irish Pub – our customers are the real deal, and so are we,” marketing manager Tee-Jay Ryan told Celtic Life Internationl.

“Regularly, at least 80 per cent of our customers are Irish and, on our big trad nights of Thursday and Sunday, it can be as high as 95 per cent.”

The stats prove what he says: The Cock ‘N’ Bull has been voted Australia’s best Irish Pub in each of the last two years by readers of the Irish Echo, which bills itself as Australia’s Irish newspaper.

Music is key to the pub’s success, says Ryan. “Our resident trad band Bacon & Cabbage play twice a week on our biggest days, and at all our major events. Our traditional Sunday Sesh has grown into our biggest night of the week.

“Wednesdays and Saturdays, we have our Shamrock Sheilas, Cara Kavanagh and Siobhan O’Donnell, playing guitar and fiddle, and all of our DJs have the Irish playlists down-pat, and yes, that includes Maniac 2000 and Shipping up to Boston.”

International acts regularly drop by. The pub has hosted the Rubber Bandits, Aslan, Gary Ogand numerous travelling Irish trad artists. Customers still recall the time, in the early 2000s, when Shane MacGowan came in on an Easter Monday, had a beer and joined in with Bacon & Cabbage.

Located inside local landmark the Grand Hotel, the Cock ‘N’ Bull has been pulling them in for 20 years now.

“We’ve been the focal point for the travelling Irish for all these years,” Ryan says.“We’ve helped Bondi grow as people come out having heard about us, and settlei n Bondi off the plane. The pub then becomes a centre for these people as they get to know Sydney, find jobs, make new friends and enjoy our world-famous craic!”

“We put on 14 hours of free entertainment,” Ryan says with a grin. “The hotel was heavily supported by Guinness and Magners – both of which were enjoyed by plenty!”

Reprinted from the Summer 2012 edition of Celtic Life International Magazine.