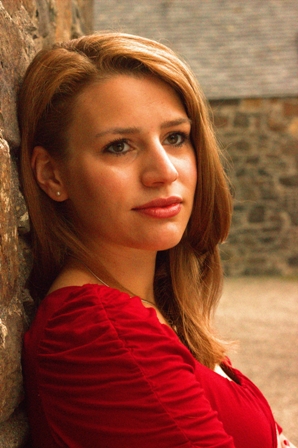 Sophie Stephenson may be a traditional step dancer, but there’s nothing old-fashioned about the way she spreads her love of the art. The Scottish dancer is adept at using social media to get the word out about step dancing. She runs a web site, Sophabulous Steps (get it – “so fabulous?”) on which she promotes the form, and as well she blogs and feeds out the news through Facebook and Twitter.

“I set up Sophabulous Steps to promote and share this accumulated percussive vocabulary with others through performances and workshops,” Stephenson comments. “I hope to impart the importance of not only passing on the tradition, but of allowing the tradition to take the natural course of growth and regeneration.”

While Scottish – she grew up in the Highlands where traditional music and ceilidh dances formed a regular part of community life – her style of step dance is closer to what one might see in Cape Breton.

“I mostly picked up my steps from Cape Bretoners and their close to the floor style with neat steps and little upper body movement continues to be a major influence on my technique,” Stephenson asserts.

Stephenson’s surname comes from her grandfather on her father’s side, who hailed from County Wicklow, Ireland. On her mother’s side, the family comes from the MacLellans and the Gillies of Morar on the west coast of Scotland.

“Although I didn’t grow up with Gaelic, my great-grandfather was a native speaker, as was common for the west Highland Gaels at the time,” Stephenson notes. “I now have good proficiency in the language after undertaking a one-year Gaelic immersion program at Sabhal Mòr Ostaig on the Isle of Skye. I feel language is the basis for culture and an important part of our life and identity.”

Stephenson began dancing at a young age, first at social ceilidhs and then through lessons in Highland, ballet and tap dance. When she discovered step dancing, it was at about the same time she started to play music. Attending local traditional music tuition festivals known as fèisean, Stephenson learned waltzes, jigs, reels, marches and strathspeys – essentially dance tunes.

“But the dance performance styles of ballet, tap and Highland didn’t fit with the traditional music I was learning and it was step dance which made sense to perform at concerts or jam sessions,” Stephenson says.

She went on to pursue her passion for traditional music and dance in academic study. Stephenson researched the performance contexts and the traditions of the Taigh Ceilidh in Scotland and Canada as part of her honours degree in Scottish literature and ethnology from the School  of Scottish Studies at the University of Edinburgh. In 2013, she received the Lisa Ullmann Dance Scholarship, allowing her to travel to Prince Edward Island and Nova Scotia to meet with dancers and explore Cape Breton and Acadian dance traditions.

One of her career highlights came in 2014 when she led a group of dancers from Scotland to Norway to participate in an international dance exchange in the Arctic. The exchange brought together Russian and Norwegian folk dance with Swedish hip hop, ballet, Highland and step.

“I found this coming together of people from different countries to share and exchange their culture an extremely inspiring and enriching experience,” Stephenson says.

“As I encounter new cultures and meet with dancers and musicians, this continues to fascinate me.”

Stephenson is also working with a small group of musicians and dancers to put together material focusing on the links between Gaelic mouth music and step dance.

“We also hope to collaborate with other artists from East Coast Canada and Donegal to explore the rich linguistic and cultural connections between Ireland, Scotland and their diaspora.”