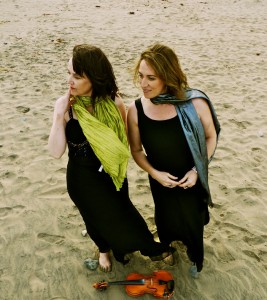 It has been a long-time coming for two veteran Cape Breton musicians.

“We always knew that we’d eventually get around to recording together,” smiles fiddler and pianist Wendy MacIsaac. “It was only a matter of time.”

“Time was always the issue,” agrees vocalist Mary Jane Lamond. “We talked about it for years, but we’ve both been quite busy with our lives. I’m glad we never let go of the idea, however, because the experience was incredibly profound.”

Like their friendship, Seinn’s soaring melodies and solid arrangements find their footing firmly rooted in a common cultural heritage.

“I am of 100% Scottish descent,” says MacIsaac. “My ancestors landed on the west side of Cape Breton Island where their traditions still live strong.”

“My family on both sides mostly came from the Highlands of Scotland,” explains Lamond. “On my mother’s side they came up to Hants Co. Nova Scotia, after the Revolutionary War, and on my father’s side they landed in Cape Breton from North Uist in the 1820s.”

Each was engaged with their ancestral legacies at an early age.

“My mother taught step dancing lessons with Minnie MacMaster (Natalie’s mom) at community halls in Inverness County when I was about 3 and I used to go with them,” recalls MacIsaac fondly. “I guess I just picked it up and then took some lessons from Harvey Beaton after that. Fiddle music and Gaelic language and singing were always heard at local concerts, radio programs and in my mom and dad’s and grandparents’ houses. So part of my music comes from osmosis. Then when I was 12, I picked up my friend’s fiddle at a concert and decided then and there that I wanted to try it. I started accompanying on the piano when I was about 15.”

“I grew up in a house where my mother played the piano and sang most nights after supper. I can’t really remember a time in my childhood when I wasn’t singing most days. My poor siblings probably wanted to kill me, but I sang non -stop growing up.”

She notes that the reasons for playing music have changed only a bit over the years.

“I think two things shifted in my life. First of all I discovered traditional Gaelic singing in Cape Breton and that became my passion, and secondly, performing for a living took some of the joy of singing for myself away for awhile. But as I found more balance in my life I found a way to fit both things in and even find myself singing around the house now for the joy of it.”

“I play music today because I still very much enjoy it,” she shares. “And also because it’s really all I have ever done as a job – I’ve been playing for nearly 30 years.

“When I listen to very good Celtic music I get inspired. I’d say most Cape Breton fiddlers of my generation would be on the same page as me when I say inspiration comes from a tape of Carl MacKenzie or Arthur Muise with Mary Jessie MacDonald on the piano, or Howie MacDonald, John Morris Rankin and Dave MacIsaac or Buddy MacMaster and Betty Lou Beaton or Jerry Holland and Hilda Chaisson. There is something special about those old tapes. They don’t have the pristine quality that the newer recordings have, but there is something to be said about just playing at a dance or a party and not worrying about mistakes or how fast or slow you are playing. I also get inspired by other Celtic musicians also, as well as musicians of other genres like blues, pop and rock, such as Lucinda Williams and Shawn Colvin.”

By turns, Lamond is motivated by an ongoing passion for her culture.

“I am still learning about Gaelic singing and the song tradition and it is such a deep well that I think I will never get to the bottom of it. So my goal is to learn as much as I can from traditional singers.

“It’s a funny thing but I never really have considered myself to have a “career” per se. I have been lucky enough to make a living doing what I love to do but mostly long to just get better at singing Gaelic songs through improving my language skills and learning from others. What is most inspiring for me is to have the opportunity to teach people about the amazing oral literary tradition that exists in Gaelic culture.”

Seinn was a natural outgrowth of the pair’s professional and personal relationship.

“Mary Jane decided she wanted to pare down from the full band sound and asked if I could play more tunes in her sets and it eventually ended up as a split show,” notes MacIsaac, adding “for the recording we picked songs and tunes we liked and then ran them by one another. In some tracks I picked out tunes I thought complimented the song and vice versa. Thankfully, we both like the same kind of tunes and songs.”

“I’m very happy to making music with Wendy,” pipes in Lamond, “and the CD combines our arranging sensibilities and also the Gaelic song and tune traditions.We have been playing the music at a few festivals this year and are having a great time. With this CD I feel more inspired to get up onto a stage than I have for a long time.”

The success of the creative collaboration has them looking to future possibilities.

“Hopefully it won’t take us nearly as long to do the next recording,” laughs MacIsaac. “I think we make some pretty good music together.”

From the opening chords of Yellow Coat to the closing refrains of If You Were Mine, Seinn takes listeners on a stirring and soulful sojourn into a rich musical heritage. Lamond shines on both the acapella Rinn Mi Còrr is Naoi Mìle and the gentle Tàladh Na Beinne Guirme, while MacIsaac struts her stuff on Keeping Up With Calum and Boise Monsters. The highlight here, however, is Hoireann ó Rathill iù ó, where each brings out the best in the other. As such, Seinn is a magical elixir of melody; one shot of supple, one shot of swagger. A special shout-out to the fabulous fretwork of guitarist Seph Peters, and to the plethora of players, producers and engineers for placing a palette upon which Lamond and MacIsaac have painted a poignant music portrait.