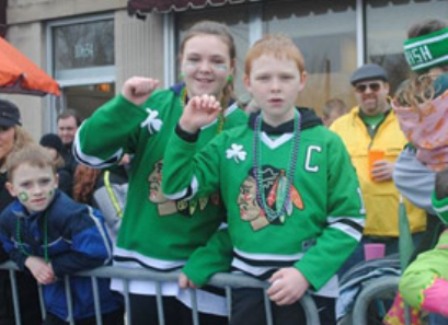 The South Side of Chicago is the greenest part of town this Sunday, as the Windy City’s Celtic community comes together for one of the largest St. Patrick’s Day celebrations in the US Midwest.

The Grand Marshal for 2014 is the Muliganeers, a Chicagoland non-profit who has been giving kids a second chance since 1995. This year’s Honoree is County Fair Foods; a local independent family-owned grocery store celebrating 50 years in business and located in the heart of the Parade route on Western Avenue.

Recently we spoke with several key members of the South Side Irish Parade Committee and Heritage Foundation Inc. about the event ~ all are residents of Chicago’s southwest side, Beverly community which is the site of this year’s celebrations.

Kevin Coakley is the 2014 South Side Irish Parade co-chair and has been involved in the parade since its conception in 1979. His father, Pat Coakley is one of the co-founders of the original South Side Irish Parade. Kevin reflects on his childhood experience, impact of his family and father’s desire to pass down the Irish customs as he is now a parent and volunteers to keep the tradition alive.

Marianne Coakley is Kevin’s mother, wife of Pat Coakley and one of the founding members of the South Side Irish Parade. She offers her perspective on the event that grew from a small way to celebrate their Irish Heritage to one of the largest neighborhood St. Patrick’s Day Parades outside of Dublin.

Joe Connolly is a former co-chair of the SSIP Parade Committee; he is also a member of the South Side Irish Parade and Heritage Foundation Board.

Jim Davoren is a long-time member of the South Side Irish Parade and Heritage Foundation Board.

What is your own ethnicity?

“I am of Irish decent. I am also a proud American.” – Kevin Coakley

“I am of Irish heritage; my mother’s people were from Tralee and Cahirciveen – my dad’s from Kildare, although my dad always liked to brag that he was third generation American and that his family practically came over on the Mayflower!  My dad was born in 1911.  In 1992, a guide “The South Side Irish in American Literature” featuring Finley Peter Dunne and James T. Farrell was published by the South Side Irish Parade and Heritage Foundation.  The guide was sent to libraries, high schools, universities and historical societies throughout Illinois.  It was an important part of the continuing effort of the South Side Irish to rediscover and preserve their 160-year heritage.” – Marianne Coakley

“I became involved with the Parade in 2010.  I felt that something was ‘missing’ in the neighborhood, without an event to celebrate our Irish heritage and family values, and wanted to help bring back the parade to the neighborhood in a manner that we could all be very proud of.” – Joe Connolly

“The talk of the first parade began during the blizzard of ’79 in Mary and George Hendry’s living room.  We were two couples, my husband and I and the Hendrys, who had great times together and George wanted to bring the parade back to the Southside.  As children, we watched the parade at 79th & Ashland in the ‘50s.  In 1960, the late Mayor Daley brought the parade to downtown Chicago.  Bring Back St. Pat was our theme in 1979 and boy did it come back!”- Marianne Coakley

“I have been in involved in the parade as a marcher since I was 7 years old (1979). My father and neighbor started the parade to pass along a tradition. They grew up with the parade on 79th street in Chicago. Mayor Daley then moved the 79th street parade downtown. Pat Coakley and George Hendry wanted their kids to have a neighborhood parade like the one they remembered.  Most of the years, I was just a marcher and then as I got older I became an announcer for the parade on cable TV. Now I am the co-chair of the parade for a second year. I’d like to see the Parade continue and share our heritage for my own children and many generations to come. “- Kevin Coakley

What are the rewards of being involved?

“The best reward is seeing multiple generations of families lined up on Western celebrating St. Patrick’s Day in a very respectful way, and of course all of the children’s’ smiling faces!” – Joe Connolly

“Our reward is observing participants showing pride in their heritage and enjoying the parade with their family and friends.”- Jim Davoren

“As the time of year for the parade begins to approach, you can feel the neighborhood come alive.  It is a time to show off our community to many visitors and, of course, it definitely boosts the economy in this area.  There was a time when the Beverly Arts Center held an Irish Film Festival which was delightful and that was a great time for people to get together with the films and receptions with Irish music and food.  Many of the local parishes begin the day of the parade with a mass.  St. Cajetan was the site of the first mass on the day of the parade – 1981.  This is usually standing room only and the church is a sea of green and Irish knit sweaters and beautiful babies. Families – moms, dads, kids, grandparents take up entire pews.”- Marianne Coakley

“Now that I have a 5 year old son, I can see how much fun he has on the parade day. There are many young kids in the area and watching them enjoy the day is a reward that I realized more after I had a child. The neighborhood is a buzz of activity working up to the Sunday before St. Patrick’s Day for the big event. The reward is seeing generations of family and friends marching in or watching the parade. After the parade people head back to family and friends house in the neighborhood for many family parties.” – Kevin Coakley

“The Parade brings a sense of excitement, pride and belonging to the neighborhood. It is a great way to introduce the neighborhood to people who embrace our values of family and community.”- Joe Connolly

“It creates a feeling of community. Not everyone in the neighborhood is of Irish heritage but they know many and enjoy the day just as much. It also has a large economic impact for local stores, restaurants and bars after the winter.” – Kevin Coakley

“This event is important because it showcases the neighborhood and Irish/Celtic Heritage, something that is very distinctive within this community” – Jim Davoren

What can attendees expect this year?

“Once again this year, people can expect to attend a great parade with bands, clowns, horses, and parish groups.  It is a day for family and friends to gather at house parties and enjoy each other’s company and conversation.  Over the years, I have heard people say that parade day is as big as Christmas and anticipated as much.” – Marianne Coakley

“Hopefully nice weather and 100 groups participating in the parade. We hope to bring a little of Ireland to Western Avenue. We will have 14 bands (local high schools and pipe bands from the area) and we hope to have 8 Irish dog breeds represented at the parade plus the local parishes and families that have been in the parade for a long time.” – Kevin Coakley

“I help out where I can with the parade but I can proudly say, ‘the torch has been handed to a new generation.’  You have to be young and have a love of neighborhood to set the parade in motion – and this committee has these attributes.”- Marianne Coakley

“I will be involved for as long as I am around.”- Kevin Coakley

“I try to support the various Celtic causes in our area and throughout Chicago, but this by far garners most of my attention.” – Joe Connolly

“The majority of the Community is of Irish American Heritage so it is part of our daily lives.” – Jim Davoren

“I would say most of my involvement with Irish is on a personal level with passing on Irish customs that were told to me by my mother and her relatives.  But it seems the farther you are away from the Irish born folks the harder it will be to promote the culture.”-  Marianne Coakley

“I attend many of the other functions in the area like Irish Fest at Gaelic Park and The Irish Film Festival to name a few. But this is the only group I am an active member.  The others I am happy to be a guest or patron. “- Kevin Coakley

Are we doing enough to preserve and promote Celtic culture generally?

“I think so, but we can always do more!”- Joe Connolly

“We can do a better job and should make that a priority.”- Kevin Coakley

“We can continue to raise awareness by bringing great Celtic themed stories and events such as ours to the Celtic community.” – Joe Connolly

“We should make a stronger effort to pass our heritage down generation to generation.”- Jim Davoren

“We can teach our children about their ancestors and where they came from. Let them know the struggles they encountered and how we ended up here in the United States. We should also push them to read the literature and listen to more of the music. “- Kevin Coakley