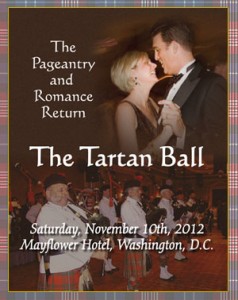 The annual St. Andrews Tartan Ball takes place tonight at the Mayflower Hotel in Washington D.C. The grand affair includes dinner and entertainment by the St. Andrew’s Society Pipes and Drums and a swing orchestra. The highlight of the evening is a silent auction, with proceeds going to the Society’s scholarship fund. We spoke with Chairman Brian K. Mabry about this year’s event.

What is your own ethnicity / background?
I am of mixed Scottish-Irish-German descent on my father’s side and half-Czech from my mother.

When did you get involved with the Saint Andrew’s Society of Washington?
I was “piped in” to the Saint Andrew’s Society of Washington, DC on January 13, 2004. My father was active in church and professional organizations, but since he never had joined a fraternal or heritage society, the idea just never occurred to me. I was not like some of our members, who grew up in the Society with their fathers, their active involvement passed down almost as a legacy. I had met some Society members through church, and when they invited me to attend a few of the Society’s “Wee Dram” happy hours I really liked the guys I met. I have made some of my closest friends through the Society – people with whom I would never have come into contact without the bond of our shared Scottish heritage.

What are your roles and responsibilities there?
As the Society is entirely volunteer-led and operated, I have had the opportunity to serve in a number of different roles. I have served on the Board of Managers, our governance body, on an interim basis twice. I co-chaired the Membership Committee for several years and chaired the Nominations Committee this past year. One of my favorite roles is as a member of the Scholarships Committee, where we annually grant educational scholarships from the Society’s Washington Scots Charity & Education Fund Scholarships Program. There have been so many impressive people come through our program, and I love the knowing that we are helping support people who in their turn are being equipped to help improve our world. I was a member of the Tartan Ball Committee for a number of years before this year, taking over from previous co-chairmen Roger Libby and J.B. Meek.

What is the Society’s core mandate?
The Saint Andrew’s Society of Washington, DC, with origins dating back to 1760, is a social and philanthropic organization of men of Scottish birth or ancestry. The Society’s objectives are to afford charitable and educational assistance to Scots, lineal descendants of Scots, and to their widows and orphans; to perpetuate Scottish traditions and culture; and to promote social activities among its members. With several hundred members, the Society organizes or supports numerous Scottish cultural events, including the National Kirkin’ o’the Tartans at Washington’s National Cathedral, a Burns Nicht Dinner, National Tartan Day Celebrations, the Virginia Scottish Games and Festival, and Old Town Alexandria, Virginia’s annual Scottish Christmas Walk, as well as that highlight of the Washington Social Calendar the Society’s annual Tartan Ball.

What is this particular event all about?
The Tartan Ball is a formal highland gala with ballroom dancing, the Society’s own Pipes and Drums performing, highland dancers, a Scotch tasting courtesy of sponsor Diageo Brands and dinner for hundreds of guests, including invited Members of Congress, Scottish Government representatives and others. Proceeds from the Tartan Ball’s Silent Auction benefit the St. Andrew’s Society’s own Washington Scots Charity & Education Fund, a 501(c) charitable arm of the Society, which has enabled scholars from both the United States and Scotland to achieve their academic goals. Last year, the Silent Auction and Tartan Ball raised $19,000 of the total $22,500 in scholarships the Society awarded in 2012, living into our motto, “Relieve the Distressed.”

How many people attend each year, and who are they?
Attendance ranges from 200-300 guests. We annually have joining us Scottish Government representatives from the British Embassy, members and officers of other Saint Andrew’s Societies, officials from the U.S. government, our members, and folks who just love a good party! This is one of the most colorful balls you can imagine, and folks love seeing the full Pipe and Drums enter into the Mayflower’s Grand Ballroom for a performance.

What is next on the Society’s agenda?
The first Saturday in December is always fun – the Old Town Alexandria Scottish Christmas Walk. I personally love marching kilted in what feels like a small town parade – waving at the kids and seeing friends along the route. Then the Burns Nicht dinner in January, and we start planning for the annual National Kirkin’ o’ the Tartans held on April 14. Again, hearing the Pipe and Drums inside the magnificent Washington National Cathedral, celebrating and sharing our Scottish heritage with the city is always special.

Are we doing enough to preserve and promote Celtic culture generally?
I do not know that I am qualified to speak on such a major issue, but I know personally that I am concerned with preserving Celtic culture. Earlier this month, the last native speaker of the Cromarty fisherfolk dialect died, meaning this Scots dialect is now lost. I read that it was the first unique dialect to be lost in Scotland. I’m proud to note that one of the Society’s recent Scholars, Dr. Cassie Smith-Christmas, is engaged in ground-breaking work in the field of preserving endangered languages. Her doctoral research, supported in part by Society funding, concerned the ways Gaelic fluency is fostered in the children of bi-lingual Hebridean families. The need to preserve and promote Celtic culture is real – it is a living legacy that has been entrusted to us from our ancestors and we need to pass it along to future generations.

What can we be doing better?
While it is wonderful that we wear our kilts with pride, and we support causes like National Tartan Day in the USA and Canada, we need to continue to support those who are dedicated to preserving and advancing our culture. For example, our Society recently awarded a St. Andrew’s Scholarship to Craig Stanford of Chesapeake, VA, an MA candidate for a joint degree in Archæology and History at the University of Aberdeen. His excavations and projects have included field work at the Rhynie Craw Stane and Pictish Power Centre as well as current research on a newly discovered Viking Age site near Burghead, in Moray, Scotland. We’re offering similar support to Stephen Donnelly of Glasgow, Scotland, who is pursuing a Master of Laws degree at Yale. A graduate of Lincoln College, Oxford, the University of Glasgow and the University of Edinburgh, he plans to pursue a dual career at the bar and in academia, and looks forward to a role in helping to formulate an understanding of the constitutional and international law implications that must be anticipated on the path to devolution, or as the case may be independence, for Scotland. Other Society grants have gone to sculptors, historians, poets, jurists, musicians – folks both discovering our shared history and preparing for our cultural future; but I think the point I would close with is that when people attend the annual Tartan Ball they are helping the Society support this type of important work that preserves and promotes Celtic culture.