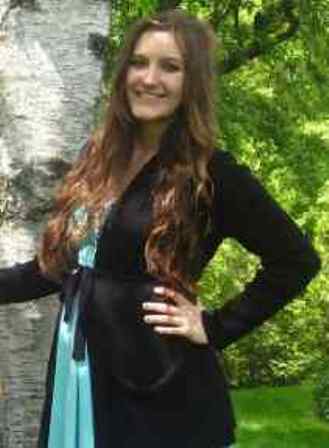 The Celtic Studies program at St. Michael’s College at the University of Toronto offers a wide variety of undergraduate courses on the languages, literature, history, music, folklore, art and archaeology of the peoples of Ireland, Scotland and Wales. This Friday, the program hosts its first Highland Games event on campus. Student Ariana Malthaner explains.

What is your own ethnic heritage/background?
I am Irish, Scottish and Ukrainian on my mother’s side and German on my father’s.

How, when and why did you get involved with Celtic Studies?
I applied and enrolled in Celtic Studies for my first year of university (2011) although I didn’t join the academic union until September of last year. I joined the union because I wanted to be more involved in something that I loved. I can’t properly pinpoint the start of (or reason behind) my interest, but as a child I decided to teach myself Irish (it didn’t work) and later on I started Irish dance and learned the fiddle.

What inspired you to put this event together?
The initial plan for this event was for it to run on the last day of frosh week in September. Unluckily for us, it happened to pour almost the entire day. While that may have been more authentically Scottish, (as everyone has joked) we were concerned about the attendance and decided to postpone. We settled on Highland Games because we thought it was something that would be fun, but also recognizable to students even outside of the Celtic world and that it might draw new students to the program and our union.

What is the event’s core mandate?
Essentially we’d like to draw attention to ourselves as a union and a program as we’re rather small in both regards, and we would like to have a larger presence on campus. But mostly, we want to have fun, we’d like to expose people to a culture they’ve perhaps never experienced before and give people who have never been to a highland games, a highland games experience.

What can attendees expect to experience?
I need to stress that it is a modified Highland Games. The cabers are not full size and a lot of the throwing games have been eliminated. The purpose is to give students a taste of the games. But, we need the games to be accessible to everyone who wants to play, and we needed games that were not going to be a potential liability. So while the games may not be the exact same as a traditional highland games, we did try. That being said, we have five games that will be running: a modified caber toss, a horseshoe toss, Maide Leisg, tug-of-war and an altered sheaf toss. We also will have tarot readings, face painting, some Highland dancing and a bagpiper. We’re going to have a small haggis for people to taste, as most students never have before, as well as hot beverages, most likely hot apple cider. Its going to be a really fun day and we’re expecting an excellent turnout.

What are the plans for the event in the years ahead?
If the event is successful I would be happy to run another one. I’m greatly looking forward to it and everyone I’ve spoken to has been extremely enthusiastic, so it all depends on how it goes, really. If it turns out as amazing as we expect it to then I certainly will run it again next year and would encourage those who take over our union to continue to run it in the future.

From your perspective, are young people still interested in Celtic culture?
Oh certainly. There is a huge interest in popular culture and its absolutely wonderful. There is an interest, though not a large one, in the history, literature and languages, and there’s been a surge of it in recent years and I will admit I’m proud to be a part of it. Young people are certainly still interested and that’s part of why this event is shaping up to be so great.

Are we doing enough to preserve and promote it generally?
Personally, I don’t think the term “preserve” really applies to this situation. I don’t think Celtic cultures need to be preserved, as I see them as living, thriving things. “Preserve” to me, implies that something has ended, or that it needs to be kept in a static, unchanging state. The beautiful thing about culture is that it can continue to grow and change without detriment to the tradition. While Celtic cultures continue to be appreciated in their traditional forms, they also have been appropriated and adapted in various ways, and in doing so have become more accessible to people who otherwise may have never experienced them. There will always be people who are traditionalist who would prefer there be no adaptations or changes to the culture, and their feelings are valid. But in order for new generations and new people to take an interest in the music, traditions and folklore of these nations, the culture has to not feel antiquated and out of date. Luckily, with the Celtic nations I think we’ve struck a really good balance between traditional and modern: the modern exists for those who wish to find it and the traditional continues to run strong for those who wish to stick to an older way of doing things.

What can we be doing better?
I will admit that, as I am a student and an academic at heart, this answer will be, perhaps, biased in that direction. I am a great lover of language, and I always have been. It is my personal feeling that the Celtic languages are underappreciated. I fully understand the historical context under which this mentality arose, and I know that there are those who still don’t see the purpose of acquiring or speaking a Celtic language, but I think the immense value of a language lies in its different way of viewing the world, and that in itself provides an insight into the culture it originates from. Not that nothing has been done: Irish has experienced a surge of interest online, with resources like TG Lurgan and websites like focloir.ie providing excellent outlets for learners and speakers to rally to and even learn from. Welsh is lucky as well, with a Twitter account, DailyWelshWords, challenging its followers to create sentences using the word they provide daily. These are wonderful steps forward and only a couple examples of the many brilliant resources online, and I would love to see more resources and more opportunities for speakers and a general revival of interest in the languages outside of the internet. I also think the history of the Celtic nations is in need of better promotion and discussion. I am continually surprised by the number of people who are unaware that Northern Ireland and the Republic of Ireland are not the same thing. Perhaps this is merely a North American phenomenon, but as a student of Celtic studies I am often frustrated by the lack of correct information out there. Not everything can be 100% correct all the time, and I understand that, but Celtic studies can occasionally be a minefield of misinformation and incorrect facts. Just to illustrate the point: I previously had a professor who gave us a list of books we had to use for essays, and we weren’t allowed to stray from it, because there was simply so much bad information out there on Celtic history that he couldn’t trust that we wouldn’t stumble upon a terrible source. I think the Celtic nations are well represented and well “preserved” in terms of their music, traditions and folklore, but I think the languages and the history are things that we as people of Celtic descent, people with an interest in Celtic cultures and Celtic studies scholars need to attempt to bring to the forefront a little more.