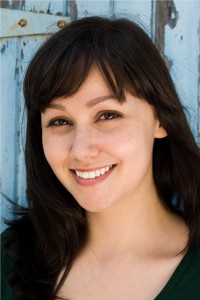 Grace O’Connell is the author of Magnified World, which was published as part of the Random House Canada New Face of Fiction Program in 2012. Her writing has appeared in various publications including The Walrus, Taddle Creek and Quill & Quire, and is forthcoming in The Journey Prize Stories Anthology. The Toronto native has been nominated for several prizes, including two National Magazine Awards, and holds a Masters degree in Creative Writing. She works as Contributing Editor for the Open Book: Toronto and writes a book column for THIS Magazine.

“I’m Irish on both sides, with a bit of German on my mother’s thrown in for good measure. We always had the O’Connell crest up on the wall when I was little — it’s a deer on a green field and I was quite attached to it. It disappeared at some point though, the way things sometimes do in old family houses. The closest I have come to actually visiting Ireland though was teaching myself a full alphabet of Celtic runes during a particularly nerdy period in high school…”

What inspired/motivated you to write Magnified World?
The very first image was of my narrator, Maggie, in a boat in the middle of a lake. I thought, who is this girl and why is she so desperate? Even though that image ended up changing a lot, it was the first kernel. Her need came through to me, and I worked backwards from that to find out who she was and how she ended up like that. It was a very circuitous process, and I wondered a few times if I was doing it wrong. But after a while I realised there was no such thing as doing it wrong, just doing it and not doing it.

Why the title?
The title comes from a poem, “Blurring”, by Helen Humphreys, whose work I really love. In the context of the book, it’s the idea of seeing the world in sudden detail, and all the disorientation that follows. It’s very much a book about knowing, and what can’t be known, about life that seems small but is endless in its possibilities – both negative and positive.

Where did the character of Maggie come from?
Maggie arrived as a stranger and stayed one for a long time. She resisted being known. She had a lot of fear. We overlapped on some things, like our love of the city, and from those bits of common ground, I was able to work my way in. I feel as if, rather than building Maggie, I slowly put her on, like clothing.

Did the book come together quickly or did you really need to work at it?

It varied during the process. There were some points where it just flowed out, as if I was taking dictation. At other times, every word – every syllable – was a slog. The whole process took about five years, with some months where I was writing feverishly and others that were just entirely fallow.

What was the most challenging aspect of the process?
For me, I think writing grief was the most difficult hurdle; making it visceral and realistically overwhelming, but not maudlin or unceasingly dark for the reader. The most frustrating challenge though was the sticky bits that come up while writing where you know what is wrong, but you don’t know how to fix it.

What was the most rewarding part of the experience?
It’s the corollary of the above: when you navigate through those issues that felt irresolvable, it’s a fantastic explosion. It’s sort of like cracking your knuckles, that feeling of something popping perfectly into place.

What did you learn during the process?
Writing a book brings your interests into focus in a strange way. It wasn’t until quite late in the process that I realised I was, to my mind, writing about how we know people – and about how, in many ways, I think people are profoundly unknowable. So in that sense, I learned about myself. Did I learn how to write a novel? I guess we’ll have to wait and see if I can do it again.

Has there been any discussion about bringing the story to the big screen?
Not as of yet, but I love the idea. I had a guilty habit of “scoring” scenes in my head while writing. One of my characters pushes another off a hotel rooftop at one point – I always saw her taking the elevator back down with “My Baby Takes the Morning Train” playing. But maybe I’m just gruesome.

How did you feel when the book was completed?
I felt like I’d been scrubbed blank. It was a sort of delicious feeling, like getting into a clean bed after a hot bath. Then all the other feelings descended – pride, terror, wanting to get back in and fix every little quibble, wanting to never look at it again, wanting to shout from the rooftops. But the first feeling was a serene little oasis that was just me, utterly alone.

What has the response been like so far from those that have read it?
I’ve gotten strong responses, both positive and negative. Aside from universal praise (wouldn’t that be nice?) that’s very much what I hoped for – to inspire intense feelings. It makes me especially proud when people talk to me about losing a parent and how they related to Maggie in a deep, personal way. I was nervous about that, about writing that kind of loss, which I haven’t experienced. To have Maggie’s version of grief ring true with people’s real experiences is astounding.

What’s next on your creative agenda?
I’m in the very (verrrry) early stages of a second novel right now. It’s sort of a bizarre re-working of the Sleeping Beauty myth. I’m excited to see where it takes me.

What made you want to be a writer?
I don’t know if it’s wanting to be a writer so much as it is wanting to write. Being a writer seems to be a side effect of writing, which has always been there. I imagine it’s like being a runner – you’ve always done it and loved it, but at some point you consciously try to get better, to focus, and to be the best you can. And you try to always cling first to that original love, not to get lost in the professional details which are necessary but also necessarily secondary.

What do your family and friends think of your vocation?

I’m lucky to hail from a family of book lovers. Each member of my family has his or her own tastes, but we all have been readers from early on. My mom read to me constantly (she’s a teacher and has a lovely reading voice) and my dad would make up stories at bedtime. My oldest sister told me stories about chocolate chip princesses and mad fruits (this all seemed perfectly sensible at the time) and my other sister put me in a picture book she made while in school (I was kidnapped by pirates). So all that is a long way of saying that my family is incredibly supportive.

What makes a good book?
A good book has to connect emotionally. That’s the first thing and the most important. It also has to succeed stylistically. Why write a book if you’re not making something ferocious and gorgeous out of words? Any prose style, sparse or ornate, can be beautiful. Both the style and the substance have to be there. I think a great book though is one that combines those things and, what’s more, feels real. Not real like the everyday – real like a strange conversation that you overhear and can’t stop thinking about.

What are your thoughts on Canadian literature today?
I’ve always been drawn to Canadian literature; I grew up on Atwood, Munro, Davies, and Findley and still read them regularly. I also read a lot of the new Canadian establishment, like the fantastic Lisa Moore, and talented newer writers like Zoe Whittall, Jessica Westhead, Shaughnessy Bishop-Stall. I think contemporary Canadian literature is incredibly rich – there are so many different kinds of fiction being published right now, both in content and style. I’m always confused when people say they find any particular country’s literature to be homogenous. Sheila Heti, Lawrence Hill, Russell Smith, Kathleen Winter, Derek McCormack – that’s an easy list off the top of my head, and just in literary fiction, and it’s an absolutely staggering range. All excellent, all different. The amount of talent in this country right now is almost obscene.

Do you have any advice for aspiring writers?
Don’t think about writing, just do it. If it’s bad at first, keep going, then go back and edit later, ruthlessly and with as much input from smart people as you can get. Don’t be impatient. This is a long game, so settle in. It doesn’t matter how many ideas you have – one or one hundred. You get no points for what you think about writing or what you could write. What matters is what you do write, actual words on the paper. Don’t flash your work around before it’s ready. And of course, read; read generously and intelligently. Read what you like, read what rips your heart out, and then write.