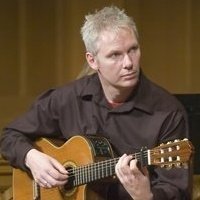 Steve Gibb is no stranger to The Pipes of Christmas. The composer-performer—well known for his guitar chops—has played the holiday festival almost annually for more than six years.

“For the last couple of years, I have been commissioned by the Clan Currie Society to compose new music for the event and that has been great fun and a great honor,” says Gibb. This year he, along with Sarah Hewitt-Roth on cello and Jennifer Port on Clàrsach, will play his composition, Lullaby For a Prince, a piece that celebrates the birth of Prince George.

“Many people in America can trace their roots back to Scotland and Ireland and are extremely proud of that rich heritage,” says Gibb of the importance of The Pipes of Christmas. “It’s this bringing together of folks from distant lands who all share something in common which makes it a special event. But even people with no Celtic ancestry get something from the concert. It’s impossible not to be moved …”

Gibb himself hails from “distant lands.” Born in Inverness, Scotland, at 18 he moved to Edinburgh to study classical guitar and bass at Napier College. A few years later, he studied at the prestigious Royal Academy of Music in London.

Gibb’s multi-instrumental prowess continues to be highly sought after; artists from Theresa Sareo and Eartha Kitt to The London Sinfonietta and Meatloaf have collaborated with Gibb on recordings and performances. His numerous compositions have also been in high demand, featured on many television networks including HBO, PBS, NBC and National Geographic.

Now based in New Jersey, this is Gibb’s eighth season playing guitar on Broadway for Tony-Award-winning Jersey Boys. He’s also working on a new solo album along with numerous other projects. His career has spanned many musical genres, but putting his own spin on Celtic music holds a special place.

As he looks forward to this year’s Pipes of Christmas, Gibb recalls favorite memories, including Evan Cattanach’s readings in “auld Scots” and the traditional Highland Cathedral, which he says “gives you shivers down your spine.”

“The show is quite grand in scale and there is such a variety of musical styles and readings,” says Gibb. “It’s quite the Celtic celebration and there really is something for everyone.”