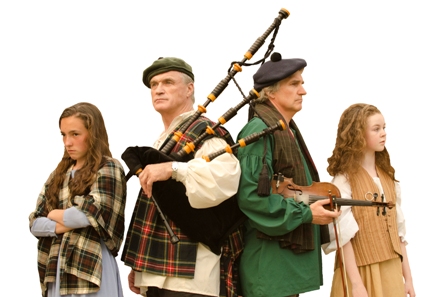 A modern musical interpretation of an old Celtic story of ambition, betrayal and endurance will be staged in Antigonish, Nova Scotia this evening.

Strathglass Farewell, a thematic concert sponsored by the Antigonish Highland Society, blends historical fact with original music and a dusting of poetic licence. A follow-up to Ships of 1801, which played to more than 3,000 people, Strathglass Farewell is the second in a planned Highland Clearances trilogy.

Producer Duncan MacDonald began to think of staging a historical concert after a trip to Scotland. He first focused on the five ships that sailed into Pictou in 1801, carrying hundreds of Scots from the west coast and islands and marking the beginning of large-scale Scottish immigration to Nova Scotia. The response to the first show convinced him there is an appetite for old stories and new music, so he has moved on to the Clearances carried out by Clan Chisholm in Strathglass, Scotland, between 1801 and 1810.

“The new chief, William Chisholm, and his wife, Elizabeth MacDonnell, decided there was more profit in sheep so they turned their clansmen out of their homes and off the land they had worked for hundreds of years. Mary Chisholm, the chief’s young niece, tried valiantly to prevent the Clearances and is revered in song for her efforts,” said MacDonald.

Ships of 1801 depicted Highlanders who had a variety of reasons for seeking a new life in the wilds of Nova Scotia, but Strathglass Farewell focuses on the particular trials of a large group who did not willingly leave the glens and dales of their birth. In response to the chief’s order to vacate, some drifted south to work in Glasgow’s factories and others took passage to Australia, but thousands came ashore to pioneer in Nova Scotia.

“Until this time, the measure of a Highland man had been his loyalty to his chief so the actions of the chief and his lady were a terrible betrayal, both in practical and emotional terms. We’ve tried to capture that in storytelling and song because that is what sustained the Scots through generations. Fortunately, we’ve tapped into some wonderful talent in our communities,” said MacDonald.

Strathglass Farewell is a layered story in which women sing of the anger and anguish at their leaving, one man weighs his future as a soldier of fortune against the possibility of independence in a new land and a couple of others count their meager blessings in a tribute to the Highland whisky still. The story, which unfolds in Strathglass and on board a crowded immigrant ship, also pits a Chisholm family against its Fraser neighbours, a situation exacerbated by the clandestine romantic involvement of younger family members.

The stirring music of pipers Frank Beaton and Heather MacIsaac is ably matched by fiddler Brian MacDonald, whose daughter Abigail sings a rich Gaelic song infused with all the weariness and heartbreak of the past as well as the unquenchable hope that a better life awaits their children.

“We’re reviving this story for those who know it well and for those who don’t yet know it. Our hope is that our show will preserve the memory of our courageous ancestors and will carry their culture and traditions into future generations,” said MacDonald.

July 12, at the Millennium Centre, Antigonish, July 24, at Strathspey Place, Mabou, and July 27, at the deCoste Centre, Pictou.