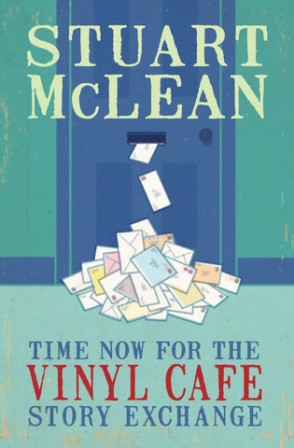 The much-loved Canadian storyteller, humorist and broadcaster is on tour this fall, promoting a new book and connecting with communities across the country in his own inimitable and endearingly warm style.

Stuart McLean has become as familiar with Canadians as they are with him.

Having crossed the country dozens of times over the last two decades, the long-time voice of CBC Radio’s popular Vinyl Café will be reconnecting with audiences in the coming months as he takes to the road to support a new volume of yarns called Time Now for the Vinyl Café Story Exchange.

“The story exchange is the part of the show when I read letters from our listeners. We’ve been doing it for ten years now, and so we’ve taken ten stories from each year and put them together in what I believe might be our best book ever,” the storyteller explained.

McLean said the process of piecing the anthology together was both challenging and rewarding.

“Jess Milton, who produces that segment of the show, went through the first big batch of stories and whittled it down. From there, she and I were able to go back and forth with the remaining stories and discuss which ones worked best for the collection.”

He noted that there were no set criteria for inclusion, except for how a piece resonated with them emotionally.

“There are a lot of big feelings in there,” he shared. “I know it sounds cliché, but some of those stories made me want to laugh out loud and others made me want to cry. A few really stood out – one in particular about a teacher who came into class and started verbally abusing one of his young students. He then stopped everything dead in its tracks and asked the other students why they had put up with him being so abusive. Then he began a discussion on the horrors of the Nazi regime. He had acted out what had gone on in that country during that period in history. To me it was very profound and very touching to read.

“On the other end of the spectrum, there are lots of stories of buffoonery, foibles and foolishness of everyday lives told with great warmth and affection.”

Interestingly, as he and Milton worked their way through the submissions, a sense of the country’s identity began to emerge.

“I think the book adds up to a bigger picture of who we are in an unspoken kind of way. It reads like you are in a room full of people who are having dinner together and who are getting to know one another more intimately.”

The renowned raconteur enjoys a unique perspective on that identity while on tour.

“Although what it means to be Canadian is still something that most people would have a hard time identifying or verbalizing, I have a sense of who we are because of my travels. It amazes me that this country can be so vast and diverse and yet there are these common bonds that we share from coast to coast.

“Canada is one of the world’s great communities,” he continued, “and we have done a very good job fostering that sense of community in our schools, and when we gather together via our televisions and radios, online, at the movies or at sporting events, etc.”

McLean finds that sense of community in the camaraderie of his travelling companions also.

“We are very much like a family out there,” he explained of his road crew and musical guests. “Like any workspace, I can’t help but get to know the people I spend my days with, especially when we are at such close quarters.”

And while he will continue to entertain audiences both on the road and on the air for the foreseeable future, the wandering scribe makes no bones about his love for home life.

“I like sleeping in my own bed, and getting up in the morning and making my own cup of coffee. I love my little neighbourhood and the people in it. It is a familiar community for me, right?

“Then again,” he laughed, “so is the rest of the country.”