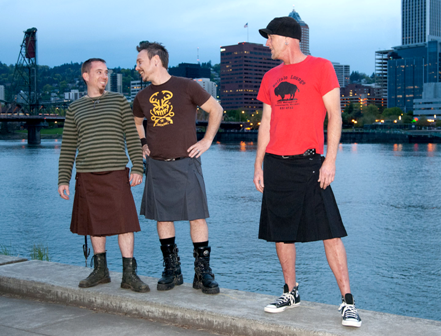 If you’ve ever struggled to squeeze your expanding girth into a favourite kilt you’ll know it’s a depressing feeling. Kilts are unforgiving garments and their inflexibility highlights weight gain. But now, StumpTown Kilts (STK) is creating kilts that solve this problem by expanding as their wearers do.

Founded three years ago by three American kilt enthusiasts of Celtic descent, the kilts are catching on among kilt-wearers of all proportions due to their practicality, aesthetic appeal and value for money.

The StumpTown team includes co-owners John McClain, who is of Scottish-Irish descent, Tim Gallagher, who’s of Irish descent, and Cyd Gann, who also has Irish roots.

“All of us enjoyed wearing modern kilts but found some things either lacking or annoying,” McClain explains. “For example Timmy ‘out grew’ three of his kilts.”

McClain says the STK is both fashionable and functional. The team is proud of the fact that the women’s kilt is not just a cropped version of the men’s but is designed for a woman’s curves, and the range includes the StumpTown MiniKilt.

The basic StumpTown Kilt (named after Portland, Oregon, where the company is based and the kilts made) is a box pleat, based on the original military kilt. It’s unlike most other kilts, which are knife pleat.

“The box pleat was the first tailored kilt, with sewn-down pleats, worn by the Scottish army circa 1790, but not tapered as ours is,” says McClain.

“We thought the box pleat accentuated and flattered the physique as it lies upon the hips and falls away.  It can be easily dressed up or look casual.  It also has great flow, sort of an accordion effect, as it moves with the body.  Our design also allows for costuming or warm layers to be worn underneath on cold nights.”

The STK is easy-care wash-and-wear and offers six adjustable waist sizes for men’s kilts and five for women. The kilt also has attachable pockets by way of a pocket strap system that looks stylish even when no pockets are attached.

The company’s client base includes old-school kilt wearers, who enjoy tradition but want an easier-wear kilt, and fashion-conscious youngters. STK’s prices compare favourably with others.

“Most modern kilts of quality cost well over $200 and the lower quality are $150 and don’t wear well, in my opinion,” McClain says. “Traditional kilts can run over $1,000.

“The StumpTown Kilt is quality and durable. Our men’s kilts cost $185, from sizes xsmall to large, and our women’s are $145 from xsmall to large. We do have xlarge, which is priced higher and a cotton duck that’s also more expensive, but we keep our prices low by averaging costs.”

Being a relatively new small business at the current time is tough, but McClain says the team is fortunate to have talented people who believe in them and the StumpTown Kilt. “They put in quite a bit of ‘free’ time in key areas that allow us to get some sleep at night,” he says.

“We also make donations to various causes and will be joining in this year to help Breast Cancer Awareness with pink STKs and Colon Cancer fund-raising with brown STKs. It’s important to keep the humor. My genuine pleasure, or I suppose it would be pride, is seeing someone else enjoying our kilt, it is a satisfying feeling.”

Now, the team is focused on increasing STK’s market penetration in North America – a Portland retail store is planned for fall 2013 – and expanding intoEurope.

“The hardest part is letting people know we exist and that there is an alternative to both traditional and modern kilts,” McClain says. “Because of our kilts’ features and high quality our business is really starting to get traction. It’s very exciting.

“Next, we intend to expand our product line with items such as men’s fitted pants, hats and vests. Diversification will continue to be a priority.”