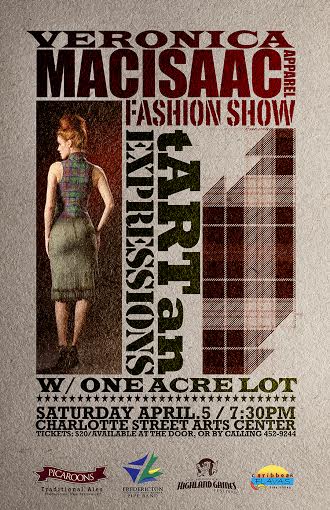 When and why did you get involved with this event?
In the summer of 2012, Veronica and I talked about the possibility of the Fredericton Society of St Andrew Pipe Band & Picaroons to host a Veronica MacIsaac Apparel Fashion Show in Fredericton. Veronica’s distinctive style and artistic passion matched perfectly with our band’s culture, vision, and followers. This year, the pipe band teamed up with the NB Highland Games Festival and Picaroons to host an event that would appeal to a larger audience.

What is the event’s mandate?
To raise funds for the Fredericton Society of St Andrew Pipe Band, the NB Highland Games Festival, and to expose the Fredericton market to Veronica MacIsaac Apparel’s unique flavour of fashion.

Why is it an important event for the community there?
We believe exposing our community to a unique array of art is important. This event does exactly that with a blend of talents from the worlds of music, food, and fashion. We want to bring people together.

What can attendees expect to experience?
Food for the Body (Caribbean Flavas Restaurant are testing their culinary expertise and will be delighting us with Haggis Samosas),  Drink for the Spirit (Picaroons has brewed their special highland games brew (Plaid to the Bone), which is an ancient herbed ale made with heather tips and flowers), and Music for the Soul (One Acre Lot will be bringing us fiddles, folk, and fun!) And of course, Halifax’s popular up-and-coming designer, Veronica MacIsaac Apparel

Will you run the event next year?
I will always volunteer my time to help organize a show for Veronica, but I believe it’s important to allow others the chance to take an event like this ‘to the next level.’

How else are you involved with the Celtic community there?
I’ve been a playing member of the Fredericton Society of St Andrew Pipe Band for nearly 30 years.

Is enough being done to preserve and promote Celtic culture generally?
I believe it’s always healthy to feel like ‘more can be done’. The more we can involve a broader audience and extend the invite to those who wouldn’t traditionally attend Celtic events, will help promote and preserve the culture.

What can we be doing better?
Encourage our younger generations to embrace the arts, get involved, and help preserve cultural diversity in their communities.