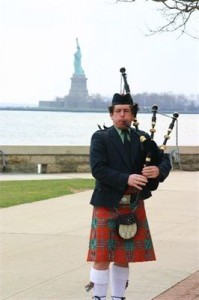 The program will run from 11 am to 3 pm, rain or shine. The program is offered to the public free-of-charge. Performers at the event include the Rampant Lion Pipe Band, John the Kilted Juggler, the New York Celtic Dancers and the NYC Harp Orchestra.

The program is produced by the Clan Currie Society – one of the country’s leading Scottish heritage organizations. The Seaport event opens NY Tartan Week – a two-week festival of all things Scottish, including a Scottish fashion show, whisky tastings, and a parade featuring pipe bands, clans and Scottish dogs. Usually held on Ellis Island, the 2013 event has been temporarily relocated to Pier 17 at the Seaport due to ongoing Hurricane Sandy repairs.

For Society president and Tartan Day producer Robert Currie, the move to the South Street Seaport is fortuitous. “We are absolutely delighted to be bringing our Tartan Week program to the beautiful South Street Seaport. Like Ellis Island, the Seaport also sustained damage during Superstorm Sandy but has been fortunate to remain open.

We’re delighted to help draw the public back to this Lower Manhattan historic gem.”The Tartan Day event serves as an important reminder that the Seaport – home to a whole host of unique shops and restaurants as well as the South Street Seaport Museum – is open for business.

“After hurricane Sandy, the Seaport is in desperate need of the support, and I know this festival will help bring much needed pedestrian traffic to the area. I look forward to participating in this year’s festival and in celebrating all that Scottish culture has to offer.”

“We’re glad that our program can help drive visitors to the Seaport,” said Currie. “It’s just one of many ways the Clan Currie Society has taken action to provide support in response to Hurricane Sandy.”

Calum Pasqua, the 2007 Glenfiddich Scottish Fiddle Champion, will be the opening performer at the event.

“I’m absolutely delighted to have Calum Pasqua on our Tartan Day bill,” said Robert Currie, president of the Clan Currie Society and producer of Tartan Day on Ellis Island.

“We’ve been fortunate to showcase Calum at many of our Tartan Day and Pipes of Christmas events in the past and he is a real audience favorite. We truly have an impressive lineup of talent booked to open NY Tartan Week and its all offered free-of-charge!”

The Clan Currie Society is a founding member of the New York Tartan Week Alliance, the official body coordinating many of the anchor events of NY Tartan Week including, the “From Scotland with Love” fashion show and charity fundraiser, the popular “Whisky Live” scotch tasting evening, and the “Celebration of Scotland’s Treasures” dinner hosted by the National Trust for Scotland Foundation USA.