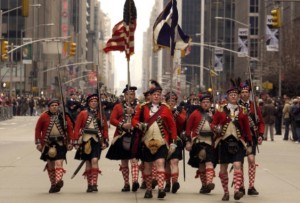 New York City turns a thousand shades of plaid this week, as Tartan Week festivities take a bite out of The Big Apple.

With events planned from March 30 to April 12 – including a parade, concerts, award galas, seminars, film premiers, theatre productions, a fashion show, a whisky tasting soiree, a 10km run, an old-school Kirkin’ o’ the Tartan, and an Ellis Island tour – there will be no shortage of kilts and sporrans to be seen across Manhattan.

“It promises to be a grand time,” shared Magnus Orr, co-founder and co-organizer of the festivities, via email from his office in Edinburgh. “There’s a wee something for everyone this year, whether you are Scottish or not.”

Orr said that the idea for Tartan Week had humble beginnings.

“It started back in 2000. One of my friends and I – we’re both keen pipers – had organized a parade through Edinburgh with 7,000 other pipers to mark the Millennium. Pipers and Drummers from all over the World took part including Australia, Canada and the USA. Many of the players approached me afterwards, wondering where and when we might host another event. Several of the pipe-bands suggested New York City – there was no street parade for Tartan Day there at that time – and so we set our sights on April 6 of 2002.”

He and his peers began working out the details. Then, amidst the planning, New York was shaken to its foundations by the 9/11 terrorist attacks.

What followed, Orr recalled, was nothing short of miraculous.

“Instead of groups cancelling, we received message after message from bands wanting to support NYC and their fellow pipers, especially the FDNY and NYPD pipe-bands. Groups from nearly every U.S. state took part in the parade, as well as Scottish Power Pipe Band and Lothian Borders Police Pipe Band from Scotland.”

Others threw their weight behind the event also, including Sir Sean Connery and NYC Mayor Michael Bloomberg, who turned-up to lead the procession along Sixth Avenue.

The parade was a huge success, as was the gala dinner that night which raised over $400,000 for cancer care.

“More than 7,500 Scottish, Irish, Canadian and American pipers and drummers gave up their time to take part,” remembered Orr. “It always struck me that when the call went out, not one pipe-band let us down. And it was that parade that really put Tartan Day on the map in NYC.”

In 2004, the parade was handed over to a local, volunteer committee who has run it since, with Orr moving on to bringing his bigger vision for Tartan Week to life.

“The internet, social media and media partnerships have been great tools to help promote Tartan Week, and I play a role in that by running the website.”

He is also planning to present a new stage show in 2014 – Spirit of the Gael, which is inspired by the Edinburgh Tattoo.

“The goal of this project is to provide a proper platform for performers from Scotland, Ireland, Canada and the USA,” he explained. “There has been a great response to the idea of making a high-energy show a regular part of the gathering.”

Orr is also a key player in the Tartan Week Alliance, a new umbrella organization which has been set-up to coordinate the gathering’s bigger happenings.

“The Alliance’s mandate is to establish Tartan Week as an International event rather than just as an American event, or even just as a Scottish event that happens in New York City. The organization is taking a very proactive approach to making sure this happens.

“It also presents a great opportunity to expand our audience base,” he added. “Celtic Connections (festival) in Glasgow sells over 220,000 tickets in January each year, and I see no reason why the Celtic Arts can’t be promoted to this level in New York City each April.”

Significance, he noted, is as important as success.

“Scottish, Irish, Canadian, American – we are all part of the Celtic community – it is important to work together to help promote the Celtic Arts; appreciation will help boost interest in our roots, and will keep our traditions alive for generations to come.”