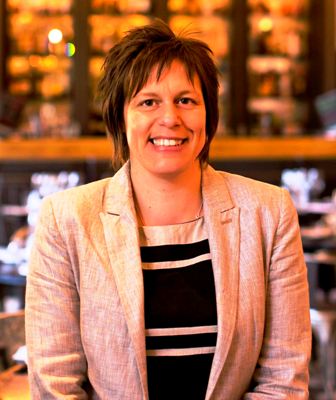 Brenda Anderson, is the World Food Travel Association Ambassador for Scotland, founder and director of Tasting Scotland, and an advocate of Scotland’s highly respected, world-class produce. In her spare time she is the leader of the West Scotland Slow Food group, part of an international movement that cares about food and the role it plays in our lives as well as a committee member of the Scottish Wild Harvests Association. Recently we spoke with her about her passion for Scottish cuisine.

What are your own roots?
I am Scottish, born in Aberdeen up on the North-East coast, famous for haddock, herring, butteries (a little like a Scottish Croissant), Aberdeen-Angus beef and a stone’s throw from the heart of Scotland’s malt Whisky in Speyside. I moved to Perthshire to work at the 5 star Gleneagles Hotel after graduating in Catering & Hospitality in my home city. Then over to the Australian Gold Coast to work, before returning to Gleneagles and Perthshire again. In 1997 I returned to Aberdeen for 5 years to start lecturing in Catering & Hospitality and then to work in the City of Glasgow College where I worked my way up to be ‘Head of Food Studies’. I left after 10 years to start Tasting Scotland, a food tour and tasting events company.

When and why did you get involved with food and cooking?
My mum enjoyed cooking as did her mother, so perhaps it’s in my genes. Both were great bakers and let’s face it there’s nothing better that coming home from school/work/play to the smell of freshly baked anything! I loved cooking at school. It was by far my favourite subject. I didn’t cook often at home, my job was more akin to the Kitchen Porter! I wanted to be a Home Economics teacher, but couldn’t sew so my guidance teacher in high school broke the bad news that I needed to be good at both, and suggested Catering College. I went into the restaurant and wine service side when at Gleneagles, after graduating, but my heart was always in the kitchen. I worked my way back into the kitchen on a part-time basis and never looked back.

Are they the same reasons you do it today?
Today, I cook for pleasure as well as occasionally for the business. I am still involved teaching professional cookery and have been known mid-tour to spark up a gas stove. There isn’t anything better than cooking by the side of a field; asparagus in the pan, with butter 10 seconds after being harvested. You just don’t get better than that. I enjoy cooking as much now as I ever did.

What are the challenges involved?
Today the challenges are that it is incredibly tiring to be on your feet all day long! Those are the things that didn’t bother me when I was half my age. Working 70+ hours a week was par for the course and I loved every minute of it. Many people worry that because people are all so well-travelled that it is harder to please them. Tasting Scotland was built on solid 5 star service foundations and I love nothing more than the daily experiences that continue to sculpt the future success of being Scotland’s most diverse and exciting culinary food tour business.

What are the rewards?
Food is like fashion, there is always a new trend. Food is incredibly exciting to be involved in. Today I love taking both visitors and locals alike to visit the artisan producers who continue to keep Scotland’s cuisine heritage alive, the innovative chefs who are pushing the boundaries and those who cook rustic food beautifully. It’s all aboutlocal food again, the way nature intended and nothing gives me greater pleasure.

What is Scottish cuisine, and how has it evolved in recent years?
How lucky must the Picts and Celts who arrived in Scotland must have felt in a country surrounded by a harvest completely un-hidden. Water all around in the surrounding sea, in lochs and rivers full of fabulous fish and seafood, fertile soil and a temperate climate ideal for growing Scotland’s original bounty. Scotland’s cuisine is absolutely 100% based on super healthy ingredients. It’s ironic today that some careless food choices have been made all in the name of convenience which has given way to Scotland being known as having the worst diet in Europe. I’m so glad we are learning that it doesn’t need to be this way. Many are beginning to eat the natural diet that sits on our very own doorstep. Traditionally, fresh fish (mainly salmon, haddock, trout, mackeral and herring), seafood (mussels, lobster, crab, prawns and scallops in particular), soft fruits, vegetables, game (venison, pheasant, grouse, partridge to name but a few), beef and lamb would have been the staple ingredients from which our cuisine was moulded. We weren’t big pork eaters, and indeed pigs were the last animal to be kept (simply because our 4 trotter friends don’t graze natural resources, but eat what we eat). The fertile soil and temperate climate is perfect for the growing of oats and barley and they also formed the cornerstone of our cuisine, with porridge, oatcakes and Scotch Broth soup all nutritious ways of keeping hunger pangs at bay for long periods of time. After that those who invaded us and protected us would have brought their cuisine influences. The Vikings brought smoking and salting, which worked well with both oily and white fish (smoked salmon, trout, Arbroath Smokies and salted herring). Europe played a part too. The Auld Alliance partnership with the French in the 13th Century began a new trend with French terminology and cooking inspirations coming to the fore. Scotland’s cuisine wasn’t one that packed a spicy punch, in fact pepper would have been about your lot, until the 1950’s when a substantial migrant Indian population arrived into Glasgow (it is still the Curry capital of the country).  Today, as is the case with everything, we operate on a global stage. Influences from all around the world are tried, tested, embellished or parked. Molecular gastronomy is here, but it isn’t as eminent as in Spain or Scandanavia. In the last few years it has been about creating stunning contemporary versions of time-served traditional dishes.

What are your thoughts on the state of Scotland’s culinary industry today?
It’s electrifying – in fact more than that. It’s getting recognized across the world at a feverish pace. The justification for this fascination is that people are really waking up to what an extraordinary yet accessible natural and healthy larder Scotland has. Fearless Chefs too are playing their part. Serve Scotland’s bounty naturally; and let it, in the words of Tom Kitchin, one of Scotland’s most inspiring chefs, sing.

What can we be doing better?
The Scotland food and drink sector has never been stronger, with exports breaking all previous figures, but there is still no clear, strategy to promote Scotland’s food and drink as THE key reason for visiting. That’s at least what we are trying to do, but it would be good to have some real tangible support. People’s conceptions too are so hard to shift. We are not all about haggis and shortbread and do we really eat Deep-fried Mars Bars? No, we don’t. We really, really don’t. I don’t know a single Scot who has ever eaten one. Whatever the reason for why the story stuck, it was the single worst thing to happen to a country with one of the best and healthiest larders in the world. One chippy (fish and chip shop) benefitted from that story and it is the bane of the lives of the very, many people who work tirelessly to banish the image. In fact don’t get me started on that one; I could be here until Christmas!

What’s next on your culinary agenda?
On the ground we are working to develop the Glasgow Walking Food Tour, because of course every great city has one. And in the clouds I am dreaming of Scotland hosting the World Food Travel Association Summit in 2021. I have recently become the certified Ambassador in Scotland for the World Food Travel Association and would love nothing more than introducing my country to the global food travel population. In fact work has started with Scotland Food & Drink, Event Scotland and VisitScotland – and as they say – watch this space. Before I retire, Scotland will be regarded as a culinary destination in the same way as France, Italy or the like. Then, and only then, will I look back, full and very happy.