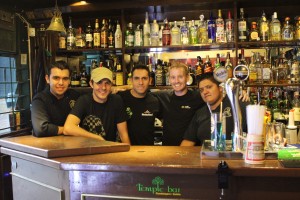 It’s been a demanding 12 months for David Walsh, co-owner of the Irish-themed Temple Bar in the populous Mexican city of Guadalajara. But three years after starting Temple Bar, Walsh and his business partner Frank Cronin are happy with the venue they’ve created and the clientele they attract.

“To be honest we had a tough year,” a weary-sounding Walsh told Celtic Life International. “We decided to invest a lot in improving the bar and restaurant facilities. We put in a new terrace, sound system, furniture and rewired the whole building. Now that is done, I think we are set for a record-breaking year.”

The Dublin-born business partners have had a hectic time since deciding Mexico needed a real Irish pub that would be as welcoming and inclusive as pubs back home.

“A lot of people try to replicate the concept of an Irish pub by merely making it look the same as pubs in Ireland,” Walsh said. “But we think what is most important is the Irish atmosphere.

“Incomes vary hugely in Mexico, but in general everyone is welcome in an Irish pub, so when we were putting together our menu and pricing, we made our food and beer accessible to everybody. If someone wants to spend $1,000 in a night they can, but should a person want a dollar beer, we have that too. By creating an inclusive rather than exclusive environment, we have cultivated a varied, easy-going, educated and open-minded clientele.”

Temple Bar’s patrons are 85 per cent Mexican and 14 per cent other nationalities that are visiting town, usually people on business or studying. The final one per cent is the Irish community, who Walsh said treat Temple Bar as their unofficial Irish Embassy.

“On St. Patrick’s Day, the Irish constitute about five per cent of the clientele, but 20 per cent of consumption,” he added.

Clients feast on classic dishes such as Fish and Chips, Temple Bar Shrimp and gourmet hamburgers and salads. The pub offers over 120 beers, many on tap and others bottled. Patrons enjoy Irish dancing and Irish music. “Our dancers hold a ceilí after their show, which gets everybody dancing,” said Walsh. “Sometimes we get in live bands, DJs or singer-songwriters. We do beer tastings too.”

The business partners have been friends since they were five years old. After getting the pub off the ground, Cronin returned to Ireland to finish an Arts degree, but he will soon return to Mexico to give Walsh a break. Money was so tight while improving the bar that Cronin decided to live in a tent for the entire final year of his degree. His entertaining accounts of this time can be found on his youtube channel, Glowpunk.

Although both grew up in Dublin, Cronin is 100 per cent Irish, with red hair and freckles, while Walsh is half-Spanish and half-Irish. “I used to spend summers in Spain where my mother was born, so I am lucky to have fluent Spanish,” Walsh said. “Frank’s family are all Irish. He has picked up the language along the way.

“I did an international Business and Commerce degree although I’m not sure it really helped, since we are self-employed. Frank was in the Irish Army for six years and retired a lieutenant when we invested here in Mexico. The reason we are here is because Claudia, my wife, is Mexican. We met in London years ago. It’s interesting that a chance meeting can lead to opening a bar in Mexico.”

Both Walsh and Cronin value their connection with other Irish expatriates. “I think I have met most of the Irish people who live in Guadalajara and there is a palpable unspoken bond between us,” Walsh said. “We look out for one another. The Irish I know here are all doing great. I know a few Scottish people too who have also landed on their feet — possibly because the Celts appear to be able to burn the candle at both ends. We are, as luck would have it, generally very sociable and also hard working.”

The partners may develop more Irish venues, but only after taking a breather. “We value family, health and happiness over money,” Walsh said. “We will always be tinkering with things to make sure we are offering our clients the best experience, but we hope the hard work is done for now. Maybe we will spend a little more time having fun with our clients and enjoying what we have.”