TEN GREAT THINGS TO DO IN BELFAST 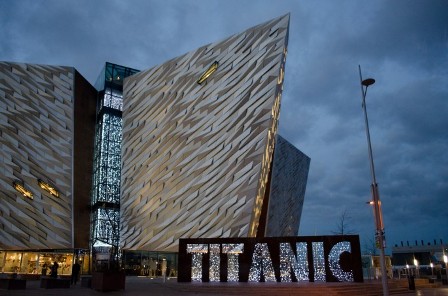 THE TITANIC EXHIBITION
An exhibition about the most famous ship to have ever sunk was never going to be a dry affair (sorry!) but it’s still surprising to learn that this fun, modern and highly interactive exhibition actually has people in floods of tears – some visitors are shocked to discover that people really died aboard the ship, rather than merely being a celluloid vehicle for Kate and Leo. The Titanic Belfast visitor experience really brings the Titanic to life – more than a crusty museum you can virtually ascend the ship using the same 3D technology seen in Avatar, you float on top of the wreck as it sits on the seabed, and take an internal cable car ride through the ship building process with which the city of Belfast is so proud to be associated; after all it was human error and not poor shipbuilding which proved the downfall of the Titanic, and we learn that tragically, staff on iceberg watch were too busy sending telegrams to earn money from rich passengers to listen to the 80 incoming iceberg warnings. Turns out the people of the city have a saying about The Titanic: ’She was alright when she left Belfast.’

BELFAST BLACK TAXI TOURS
The number one thing to do in many peoples eyes, and essential if you want an understanding of the Troubles that have shaped this city’s identity, are Belfasts’ black taxi tours. There aren’t many UK cities where you feel like you’re visiting a real-life war zone, but here real Belfastians drive you round the highly politically sensitive areas of the city in their own taxis showing you the murals, including the so-called peace wall  –  a compete misnomer as the wall is there to segregate the opposing sides of the community, and there are 88 such fortifications throughout the area including gates which bang shut at night to keep the two sides apart. You can write your name and wishes for peace alongside those of Bill Clinton, whose own inscription has been preserved for posterity in metal.

HIGH TEA AT THE MERCHANT
High tea is a big deal in Belfast and there is no better place to treat yourself in the city centre than by entering the warm embrace of Belfast’s grand dame of hotels, The Merchant. Set in a former bank, the plush yet cosy surroundings of the hotel are a great place to enjoy some deserved decadence.For good measure high tea is served in a newly gilded atrium with blinging chandelier and live piano music playing, while you tuck into sweet treats such as macaroons and mini cakes, all baked on the premises. For really special occasions consider checking into one of the rooms which are a mixture of traditional or art deco in style, or grab a spa treatment followed by a soak in the rooftop hot tub.

BELFAST WALKING TOUR
A pocket-sized city such as Belfast is best discovered on foot and you can tailor make your tour with Belfast tourist Board guide Dee Morgan, who’ll show you the bars, shopping, culture and history depending on your preferences. Being led down charming lanes, or given an insight into something you might not have otherwise noticed or understood is the perfect way to orient yourself when your first arrive and you can then build on this knowledge by doing your own walking, as long as you can resist the temptation to just walk back into the best of the bars you’ve been introduced to.

SHOPPING
Belfast has all the shopping you could want without the large distances that characterise most European cities. The Mall here, Victoria Square is part open air and a delight to shop in and around. As well branch of every international store you’re familiar with on the high street there are a few other less recognisable names such as Dunnes Stores plus a sprinkling of specialty Irish shops like The Wicker Man from which to pick up souvenirs and gifts.

VIEW FROM THE DOME
The best place to see the view of the city’s rooftops is from the Dome at Victoria Square  – and the best thing is you can go up there whatever the weather and it doesn’t cost a penny. Just jump in one of the elevators inside the shopping complex.

THE MAC
A new addition to the Belfast art scene the MAC has art and culture on three floors plus an enticing all day cafe with free wi-fi and eye-popping cakes. A mix of artistic space, theatre, music and dance in Belfast’s bustling Cathedral Quarter, it’s also a place you can go to hang out by day and take a break from all that sightseeing in chilled-out and welcoming surroundings.

ULSTER HALL
One of Belfast’s oldest buildings, built in 1862 before going on to be used during World War II as a dance hall to help entertain US troops, Ulster Hall is still the city’s main concert venue. It’s well worth trying to get tickets for a gig at this historic building while you’re in town, to tap into the rich cultural history of the building, which has been heavily associated with punk in its time, and was famously meant to be the venue for a gig by The Clash in 1977 that was cancelled at the last minute as no-one would take the risk of insuring them. As well as all the latest bands on tour, the hall plays host to classical music recitals, craft fairs and all sorts of other cultural programs.

ULSTER MUSEUM
Make sure you allow plenty of time for this free museum billed as Northern Ireland’s treasure house, with  an excellent and thorough history of Northern Ireland including moving exhibits about the Troubles. Set within beautiful botanical gardens the display space at The Ulster Museum itself numbers some 8,000 square meters including fine art and ancient artifacts. There’s also a cafe/restaurant and of course, a gift shop.

DRINK AT THE DUKE OF YORK
And finally after all that, yes you deserve a pint of Guinness. And there’s no better place to stop off for one (you are limiting yourself to one, aren’t you?) than the stunning and historical surroundings of The Duke of York pub tucked down one of the oldest charming courtyards in Belfast’s Cathedral Quarter. It’s where Snow Patrol played their first ever gig and remains frontman Gary Lightbody’s favourite boozer, and it is easy to see why.