Ten Things You Can Only Do In Scotland 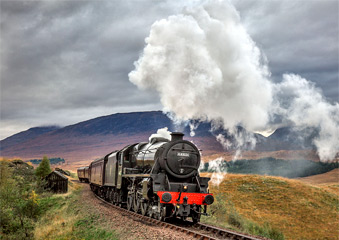 Many people travel to Scotland to view the beautiful scenery and there is no denying that it has some of the most stunning landscapes in the world.  However, Scotland has much more to offer those looking for a memorable adventure, there are some things that you can’t do anywhere else in the world.

4.  Enjoy the view from the tallest, fully rotating free-standing structure in the world –  at 127 metres high, The Glasgow Science Centre Tower provides panoramic views of up to 20 miles across the city of Glasgow.

5.  Follow Harry Potter’s steam train journey – Book a seat on the Jacobite steam train and follow the West Highland Railway Line over the Glenfinnan viaduct made famous in the Harry Potter films as the route taken by the Hogwarts Express.

6.  Take a trip ‘Doon the Watter’ on the last seagoing passenger carrying paddle steamer in the world – The PS Waverley was built in 1946 and is named after Sir Walter Scott’s first novel.

8.  Enjoy a boat trip through the air on the world’s first and only rotating boat lift – The 35 metre tall Falkirk Wheel was designed to connect the Union Canal and the Forth and Clyde Canal, take a 50 minute boat trip and experience being lifted into the air as you travel between the two canals.

10.  Visit the largest arts festival in the world – For three weeks every August thousands of performers from all over the world take to the streets and festival venues of Edinburgh for the Edinburgh Fringe Festival.