Ten Things You Need to Know About the Ryder Cup 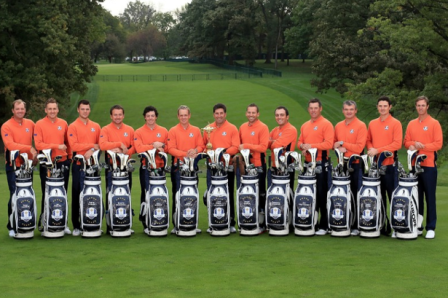 Some of the best European and American golfers will face off in the 40th Ryder Cup, from September 23 to 28, 2014, at Gleneagles in Perthshire, Scotland. To drive home the significance of this biennial team match – arguably the world’s most-anticipated golf event – our senior writer Michelle Brunet looks at some golfing highlights from its past and the latest news.

1. It is fitting that Gleneagles is hosting the 2014 Ryder Cup since the Scottish course hosted what is often credited as the precursor to this celebrated golf competition. In 1921, the first international golf tournament was played between teams from Great Britain and the US on Gleneagles’ historic King’s Course. The British team – made up of legends like Abe Mitchell and J.H. Taylor from England, James Braid and George Duncan from Scotland and Harry Vardon from the Bailiwick of Jersey – won the challenge. Representing the US were prominent golfers such as Walter Hagen, Wild Bill Mehlhorn and Scottish expats Fred McLeod and Jock Hutchison.

2. In 1926, American and British teams faced off again, this time at the Wentworth Club in Surrey, England. Present for the international competition was Samuel Ryder. The entrepreneur had taken up the sport later in life and hired Abe Mitchell to be his personal golf instructor. “Ryder was enthralled by the match at Wentworth and particularly delighted to see Mitchell team up with George Duncan to defeat the defending Open Champion, Jim Barnes, and the great Walter Hagen,” states EuropeanTour.com. “‘We must do this again,’ said Ryder in the bar afterwards and The Ryder Cup was born.”

3. Samuel Ryder, the Ryder Cup’s founder, donated the gold trophy awarded to the winning team. The inaugural tournament took place in 1927 at the Worcester Country Club in Massachusetts when the US took home the Cup. Out of the 39 Ryder Cups played between 1927 and 2012, the US has won 25, Great Britain (or Great Britain and Ireland, or Team Europe) has won 12, and the teams have tied twice.

4. In 1973, the name of the British Ryder Cup team changed to Great Britain and Ireland,  although golfers from Northern Ireland and the Republic of Ireland had been playing on the squad since 1947 and 1953 respectively. It became Team Europe in 1979, extending membership to continental golfers. This was to even up the playing field – the US had won 18 of the 22 Ryder Cups up to that point – allowing Spanish greats Seve Ballesteros and Antonio Garrido to come on board. Since 1979, the European team has won nine of the last 17 Ryder Cups outright, including five of the last six.

5. The present day Ryder Cup format includes three days of play between the US and European teams, each comprising 12 golfers. The first two days consist of four foursome and four fourball matches, where teammates compete in pairs. Twelve singles matches take place on the last day. A total of 28 points are up for grabs over the three days. To win outright, a team must score at least 14 ½ points. To retain the Cup from a preceding win, the defending champions must at least tie with 14 points.

6. Europe’s victory at the 2012 Ryder Cup is known as the “Miracle at Medinah.” After the first two days, the US was leading 10-6. But a glimmer of hope arose for Team Europe near the end of day two. “It will probably remain a mystery why they did not come to life until late on Saturday night, when a birdie by Rory McIlroy on the 13th hole of the day’s last fourball match inspired Ian Poulter to finish the day with a run of five birdies,” wrote Richard Williams in The Guardian newspaper. “After that, they started to believe that a miracle was possible.” On the Sunday, Europe made, as Williams described, a “comeback of epic proportions,” winning eight and halving one of the 12 singles matches.

7. September’s tournament is the second time Scotland will be hosting the Ryder Cup; in 1973 it took place at Muirfield. Tickets to this year’s Ryder Cup Match Days have been sold out for months and it is predicted that 45,000 spectators from 75 different countries will visit Gleneagles each day. The Jack Nicklaus-designed PGA Centenary Course is ready to welcome the American and European teams. In recent years, Nicklaus oversaw improvements to the course, including the use of a SubAir ventilation system – the first UK course to do so – and significant upgrades to the 9th and 18th holes.

8. Eight-time majors champion, six-time PGA Tour Player of the Year and four-time Ryder Cup player Tom Watson is Team USA’s Ryder Cup captain for the second time this year. Watson has chosen Raymond Floyd and Andy North as vice-captains. Team Europe’s captain is European tour champion, five-time Ryder Cup player/vice-captain, and Dublin, Ireland-native Paul McGinley. He has recruited fellow Irishman Des Smyth and Scotsman Sam Torrance as vice-captains. Each team is made up of the top nine American or European golfers, based on rankings and performances at tournaments through to August 2014. As you read this, Watson and McGinley are about to, or have just announced the three remaining players they selected, using their own discretion, for their teams.

9. While the three match days take place between September 26 and 28, the 2014 Ryder Cup is a week-long affair. The Junior Ryder Cup for American and European youth is scheduled for September 22 and 23 at Perthshire’s Blairgowrie Golf Club. The week also features a gala concert, featuring renowned Scottish and international acts, an opening ceremony, numerous family-friendly events and more. More than 1,800 volunteers will help run the world-class tournament, including 50 youngsters selected to receive financial support and vocational training as part of the Volunteer Support Scheme/Scotland’s Best program. Additionally, the first practice day has been named Tartan Tuesday when spectators are encouraged to wear their favourite plaid to welcome golfers and the world to Scotland.

10. When Scotland bid to host the 40th Ryder Cup, it committed to increase and enhance the golf events it hosts. EventScotland kept that promise and the country’s 50th  golf tournament since 2003 took place in June of this year. That milestone competition was the Scottish Hydro Challenge, which Martin Dempster, of The Scotsman newspaper, described as a “key tournament in ensuring that opportunities are given to the next wave of Scottish professional golfers in terms of advancing to the next stage of their careers.” As part of the Ryder Cup legacy initiative, investment in domestic golf events is planned to continue through to 2018.